Recession Fears Pick up Ahead of FOMC and Q2 GDP

Fundamentally, oil prices have reacted more strongly to themes of demand destruction and growth concerns than to the unchanged challenges around supply constraints. This week sees a return to high impact US data, as the major event risk of the week is arguably the FOMC rate decision on Wednesday and the first look at Q2 GDP in the US on Thursday.

The FOMC meeting is largely expected to result in a 75 bps hike which would typically see the dollar remain supported however, dismal PMI data last week has placed some observers on recession watch, meaning that a rather aggressive hike could be seen as showing the economy dangerously close to a downturn. Expect volatility to increase on Wednesday going into Thursday.

The first look at US GDP for Q2 has been revised lower, from 0.9% to 0.4% which would avoid a technical recession which has been characterized as two consecutive quarters of negative GDP growth. This is in contrast to the Atlanta Fed’s forecasting tool ‘GDPNow’ which anticipates a 1.6% contraction in growth for the second quarter. The significant divergence in the two figures suggests there will be some degree of repricing depending on prevailing sentiment at the time.

US Treasury Secretary, Janet Yellen mentioned on Sunday that even if we were to see a negative Q2 figure that it wouldn’t necessarily mean the US is in a recession. A recession is characterized by a broad-based contraction that ripples through many sectors, something we aren’t currently seeing. In addition, prior recessions all witness an acceleration in job losses while the US labor market remains incredibly strong. Yellen, explains that the economy is simply slowing down which is “appropriate” for a healthy economy.

WTI crude oil continues its downward momentum which accelerated after the ECB meeting last Thursday when the dollar eased somewhat, in response to a short term rise in the euro. The move coincided with a retest of the descending trendline and price now tests horizontal support at around $93 – marking a full retracement since April this year.

A break below $93 with follow through highlights the 61.8% Fib of the ’21-’22 move, at $88.40. The MACD favors the bearish momentum as the MACD line moves lower than the signal line. The RSI trades lower but has some room before breaching the oversold indicator. 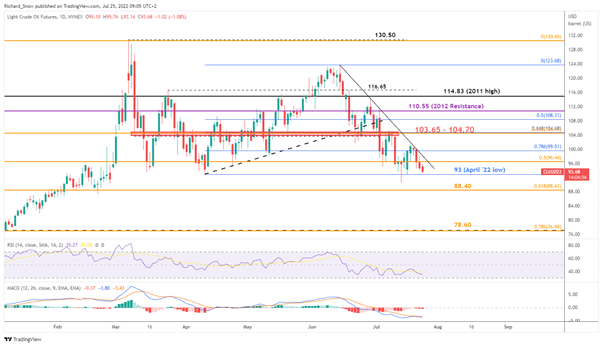 Something else to keep in mind is the widening Brent-WTI spread – suggesting that crude oil may be more susceptible to faster price declines. Asia has increased its demand for Brent crude oil while the EIA recently reported a decline in demand for WTI. 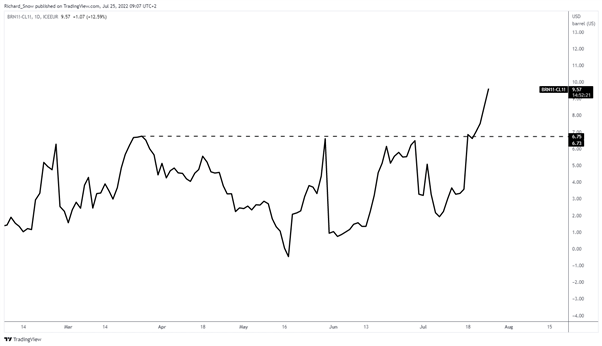