The Dax reversed earlier declines in European trade as earnings expectations outweighed concerns about a possible recession. Sentiment fluctuated in the session as investors turned their focus to earnings of US big-tech companies as they await another Federal Reserve interest-rate hike of at least 75 basis points this week. The decision of the US Federal Reserve as well as technology titans will help clarify the outlook for a month-old rebound in stocks.

German business confidence deteriorated to the worst level since the early months of the pandemic on growing concerns that record inflation and limited energy supplies from Russia will throw Europe’s biggest economy into a downturn. A gauge of expectations released Monday by the Munich-based Ifo Institute fell to 80.3 in July from 85.8 in June. Analysts had predicted a drop to 83.0.“Germany is on the brink of a recession,” Ifo President Clemens Fuest said. “High energy prices and the threat of gas shortages are weighing on the economy. Companies are expecting significantly worse business activity in the coming months.”

A key risk for Germany, which imports a large share of its natural gas from Russia, is that further slowdowns or standstills in energy supplies could drive inflation higher still. These risks appeared to be allayed by comments from the Kremlin earlier today, that Russia is ‘not interested’ in cutting off gas to Europe.

European Central Banks (ECB) member Martin Kazaks said, “Stronger Hikes May Not Be Over After Big Move”. The September increase should be quite significant as well while stating at the same time that uncertainty may cloud plans for later moves. 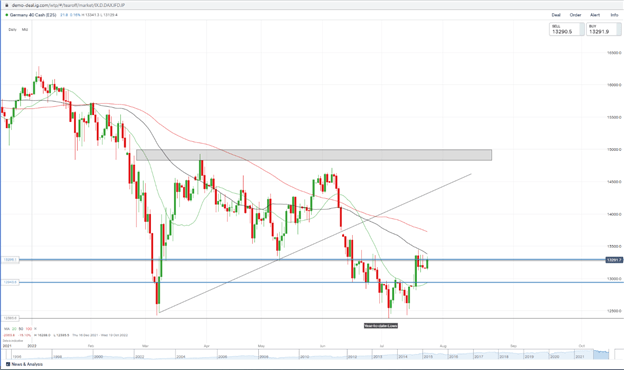 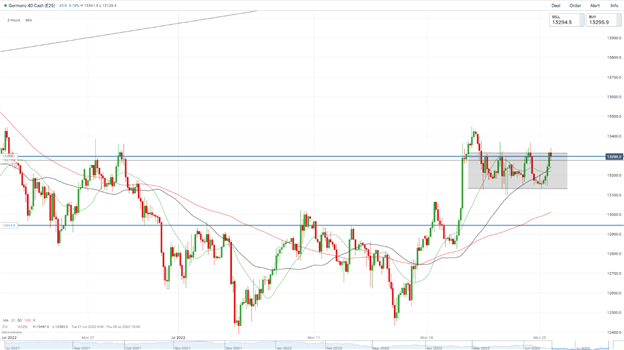 From a technical perspective, Friday saw a push down to close the day as a shooting star candlestick pattern as well as below our resistance area 13300. On the daily chart price is currently compressed between the 50-SMA and 20-SMA with a break needed of the 50-SMA if we are to push higher.

Dropping down to the 2H chart we seemto be trading above the 20, 50 and 100-SMA. We continue to be rangebound since the morning with a 2H candle break and close outside the grey box potentially providing opportunities in either direction.