ECB Preview: How Will the Euro (EUR) React?

*LIVE ECB COVERAGE: We will be providing live coverage of the ECB Decision from 13:00BST*.

OVERVIEW: The ECB is set to raise interest rates for the first time in over a decade and provide additional details on the anti-fragmentation tool. Currently, money markets are pricing in 40bps worth of tightening. This had been boosted by rather timely sources, suggesting that a 50bps hike is on the table. However, this is despite the ECB has essentially pre-committed to a 25bps hike, as per their prior meeting, while ECB President Lagarde also explicitly mentioned a 25bps hike at the upcoming meeting. For me, I am still slightly geared towards a 25bps hike given the rising stagflation risks that the Euro Area is currently facing.

Aside from interest rates, the biggest focus is on the anti-fragmentation tool, which will be even more important given the political turmoil in Italy. In turn, this will make the ECB’s already tough task of hiking rates while containing spreads that much harder. Regarding the tool, to be seen as credible, the size will have to either be unlimited or at the very least have minimum fiscal conditionality. Failure on this front will likely exacerbate the downside risks that the Euro faces and place European equities under pressure. As we saw last month, light details on the anti-fragmentation tool front prompted both the Euro and the DAX to fall 1.5% and light details at this meeting will only see a more pronounced move.

Since the prior meeting, the inflation outlook in the Euro Area has deteriorated further with headline prices rising to a fresh record high of 8.6% in June, from 8.1%. While aggressive steps taken by the Fed, SNB and BoC also raise the prospect of the ECB considering a larger move. However, given the fact that the ECB has followed their rigid sequencing thus far, I am sticking with a 25bps hike, although, a 50bps hike cannot be ruled out. That said, should the ECB opt to raise rates by 25bps, which in today’s environment would feel like a rate cut with other banks hiking as much as 100bps, the Euro is likely to come under pressure initially. 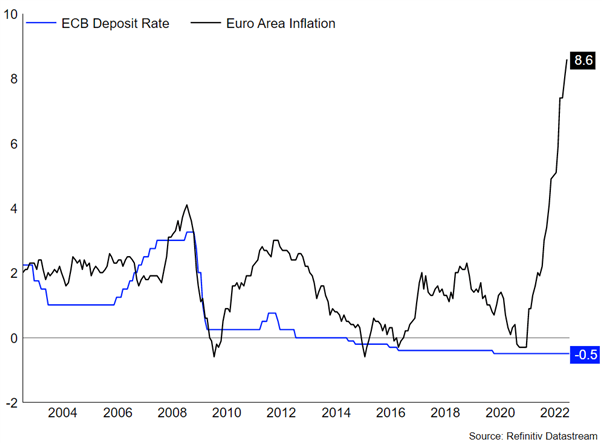 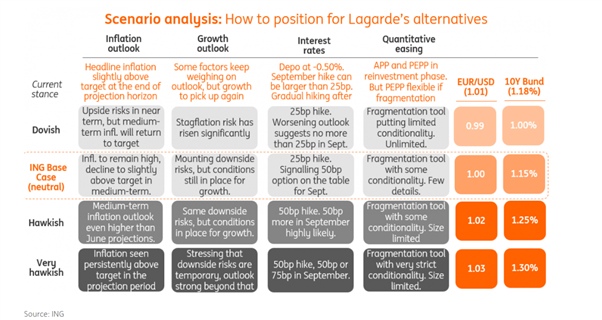 MARKET REACTION: Heading into the ECB decision, the Euro has seen a modest recovery, however, the move is more corrective and maintaining those gains will be hard to come by. As such, continue to hold a downside bias below 1.0340-60 and the 55DMA. As it stands, EUR/USD ATM overnight implied volatility suggests an implied move of +/- 1.0% (or 104pips). While a 25bps hike would be seen as a hawkish disappointment, follow-through will depend on whether the ECB can provide a sufficient anti-fragmentation tool. That being said, the ECB will have a tough task keeping the Euro supported and thus I expect the single currency to remain under pressure.