USD/JPY Divergence Hints at Deeper Pullback Ahead of BoJ, FOMC

USD/JPY has drifted lower thanks to a softer US dollar. The dollar has declined since peaking after the Bank of Canada (BoC) shock 100 bps rate hike last Thursday. This morning the dollar (via the US Dollar Index, ‘DXY’) has continued the move lower and will mark a third successive day of declines should we close in the red. Look out for a potential MACD bearish crossover.

Looking ahead the economic calendar produces minimal US data as we head into the FOMC decision next Wednesday. Previously, comments from hawkish members of the FOMC tended to accelerate rate hike odds and dollar valuations but seeing that the rate setting committee is in its usual media blackout period, markets have seemingly taken the opportunity to recover lost ground vs the dollar. Markets will look out for the Bank of Japan’s (BoJ) quarterly report as there is no expectation for a move on the interest rate front.

Technical Levels to Watch Ahead of BoJ Meeting

USD/JPY will also mark three successive days of selling if we close in the red. The recent pullback may offer better entry points for USD/JPY bulls, perhaps around the 136.89 level, but the RSI and MACD indicators suggest a bit of caution here. Negative divergence on both the RSI and MACD indicators signal the potential for a reversal at these extended levels in USD/JPY.

While fundamentally, the Japanese Yen offers little drive the currency forward, continued dollar weakness in the lead up to the FOMC rate decision and BoJ rate meeting opens the door to a continued move lower. Support comes in at 126.89 followed by 135.60, 135.00 and 134.50.

Take a look at our MACD module for more on positive and negative divergence. 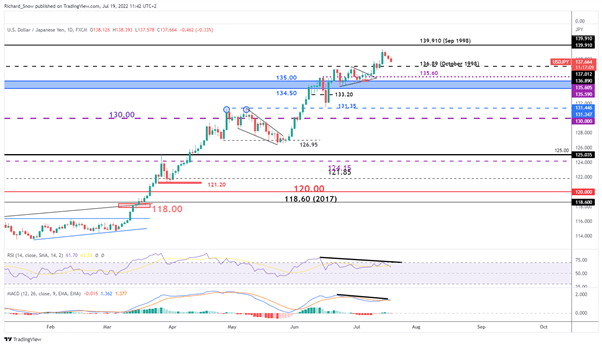 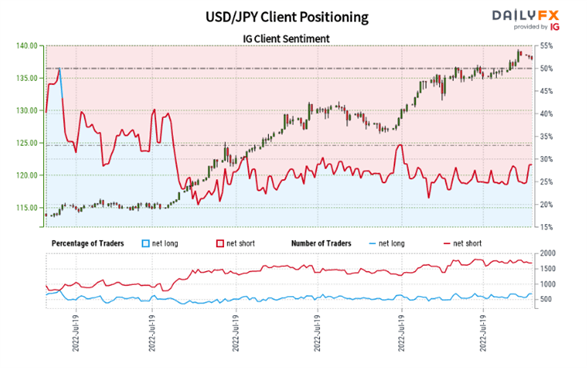