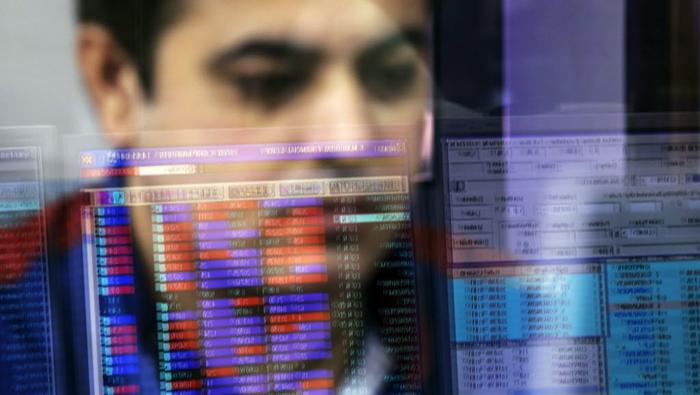 DAX, DOW and FTSE Move Higher Despite a Dent in Optimism

The Dax rose following a subdued opening amid caution leading into a key meeting of the European Central Bank later this week. Eurozone inflation pushed higher in June, official data showed on Tuesday, as soaring energy prices weighed heavily.Investors don't seem to be expecting the inflation data to have a major impact on the European Central Bank's (ECB) upcoming rate decision. According to Reuters, money markets are pricing only a 20% probability of a 50 basis points ECB rate hike in July.

Europe’s energy infrastructure is starting to strain under the extreme heat that’s blanketing the continent.Power stations are operating at low levels to keep temperatures in check, while natural gas pipelines are limiting flows -- just as demand for energy to cool homes and offices rises.In Germany, the Rhine River a key route to deliver coal from major ports in the Netherlands and Belgium is at its lowest level in years. That means some power plants are not getting enough fuel, threatening to derail the country’s plan to build up stockpiles ahead of winter.The European Commission doesn’t expect Russia to restart the Nord Stream pipeline to Germany following maintenance later this week, according to a senior official. While Moscow and supplier Gazprom PJSC have given no indication that the link won’t restart as scheduled on July 21, the market remains on edge. 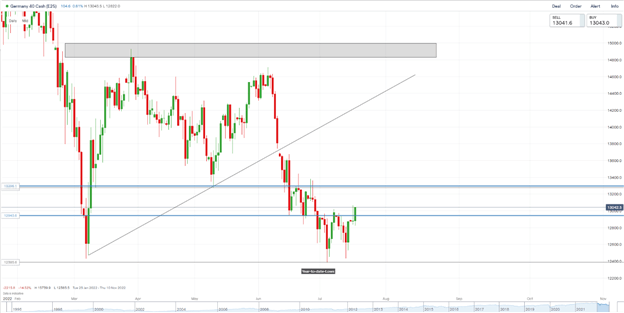 From a technical perspective, we failed to close above resistance yesterday surrendering gains in the US session to close back below the psychological 13000 level. Should we push higher in the US session would-be sellers may find opportunity around the 13150 as fundamentals weigh heavy on the Eurozone as gas worries multiply. We do need a daily candle close above the psychological 13000 level if we are to see further upside this week.

FTSE 100: Drifts Between Losses and Gains on the Back of Surprising UK Job Data

The FTSE opened in the red before bouncing back to post gains despite the latest UK jobs report data showing wage growth is still lagging far behind inflation. The UK's unemployment rate held at 3.8% in the three months to May and the number of people in work rose by the most since the middle of 2021. The big concern is that the higher wages paid by the private sector will serve to entrench inflation, while the small pay rises witnessed in the public sector in the face of soaring prices will continue to stoke industrial tensions, Laith Khalaf, head of investment analysis, AJ Bell, said. We have witnessed the recent rail strikes which will only be the beginning should these wage conditions persist.

The blue-chip index saw money transfer company Wise jump 10.3% after providing its trading update, while Made.com slumped 35.1% after it slashed its sales and earnings guidance for 2022.

The FTSE weekly candle closed as a hammer just above resistance and now turned support at the 7150 area on Friday followed by yesterday’s upside rally. Unfortunately, the rally proved short-lived as we pushed down in the US session erasing most of the day’s gains. We did however print an inverted hammer candle on the daily timeframe signaling more upside to come. Should we be able to take out yesterday’s highs at 7271 we would need a candle close above the 50% fib level which would finally signal a breakout of the range which began on the 10th of June 2022.

The Dow rallied higher in premarket trade rebounding from previous session losses as a busy week of corporate earnings continues.Indices on Wall Street closed lower Monday, with the blue-chip Dow index dropping over 200 points, or 0.7%, following a report that Apple was going to slow hiring, becoming the latest tech giant to put the brakes on as the economic outlook grows murkier.

Later in the day, we have US Federal Reserve Member Lael Brainard speaking followed by Streaming giant Netflix reporting results after the market close. 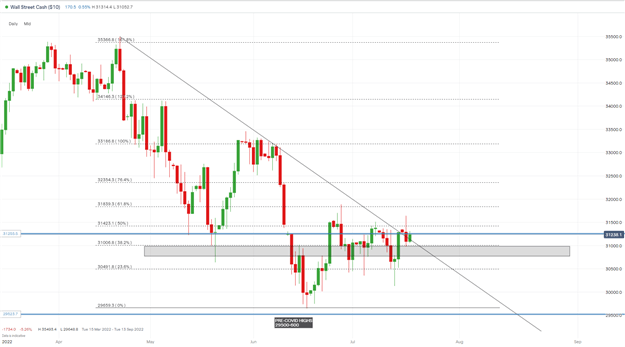 From a technical perspective, last Friday saw us close as a bullish engulfing candlestick while forming a three-pin candle formation as well, both of which signal reversal and a potential for higher prices. Yesterday saw the much-anticipated push-up before a change in sentiment saw the Dow decline and close back below the trendline as a shooting star candlestick. With yesterday’s daily candle close and sentiment mixed heading into the US open caution is the word of the day with higher prices providing would-be-sellers the best opportunity.