The much-awaited day has arrived – Nord Stream 1 is shut off for routine maintenance from today until the 21st of July. The maintenance period has stoked speculation around the possibility of Russia delaying the resumption of gas flows once maintenance has been completed. Germany’s Economy Minister Robert Habeck warned of the possibility of Russia cutting off gas flows, blaming it on an arbitrary technical issue and warned the country to prepare for such an outcome.

Gas supplies via Nord Stream 1 have been in decline from May and flows were reduced to 40% from mid-June. Russia blamed this on a crucial component that was sent to Canada where sanctions delayed its return to Russia. Over the weekend Canada announced the turbine would be returned as a result of a “time-limited and revocable permit”.

Gas Flows from Russia to Germany via Nord Stream

An abrupt end of Russian gas would have severe consequences on the economy, potentially costing 193 billion euros and affecting 5.6 million jobs. The timing also could not be worse, as the summer months are typically a time when European countries replenish gas storage ahead of the winter months. The chart below shows that Europe is trailing the 5 year average, although gas stocks have improved from March and April levels. 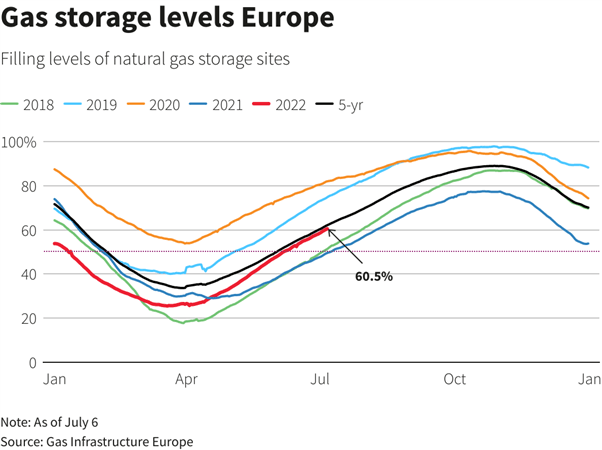 The euro continues to be one of the most susceptible currencies as multiple headwinds accrue. The ECB continues its forward guidance around an almost certain 25 basis point (bps) move when the Governing Council meets later this month. On the other hand, the dollar goes from strength to strength, buoyed most recently by a stellar NFP jobs report.

The daily EUR/USD chart shows another early attempt to reach parity after Friday saw a fairly robust rejection of the crucial level. The RSI and MACD index show no sign of letting up as the pair continues to trade in oversold conditions. Crucial support lies at parity (1:1) while resistance comes in at 1.0310, 1.0340 and 1.0450. 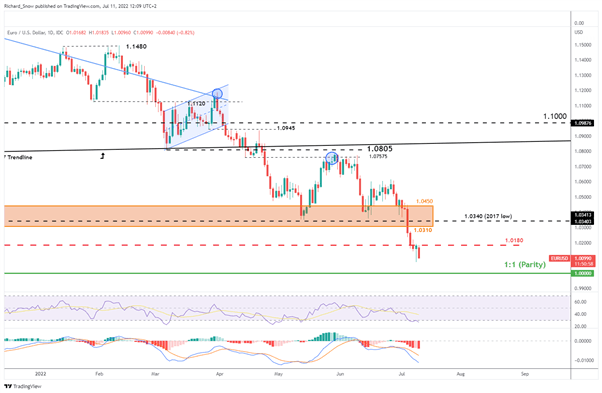 On the 4-hour chart, the downtrend continues – lower lows and lower highs. The first challenge to the bearish push appears via the Friday wick low. 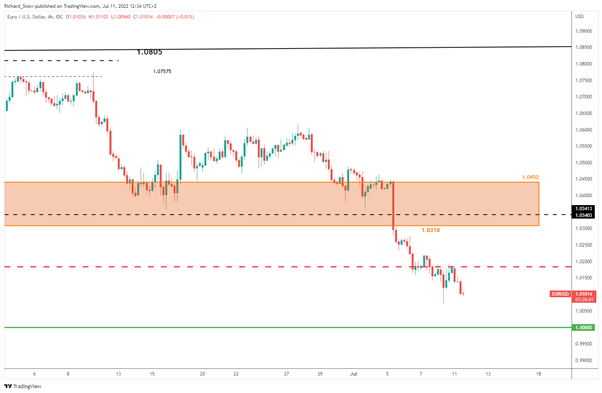 Risk events are dominated by the US this week with US CPI inflation expected to rise further. Retail sales and the University of Michigan consumer sentiment report will be monitored for further potential signs of a slowing US economy. Major EU data comprises of ZEW economic sentiment and Germany CPI data which is forecast to ease ever so slightly. 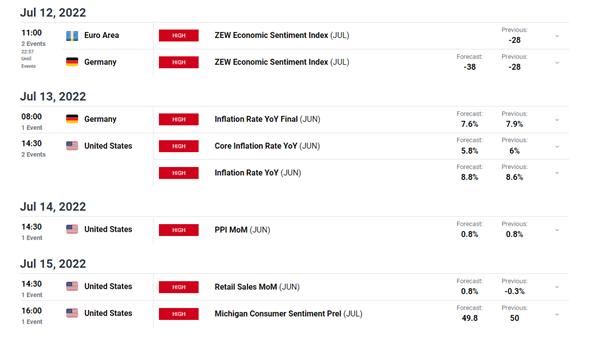