Consumers will be glad to see oil prices softening on the back of Friday’s decline although it may be some time before this translates into lower prices at the pumps. The question of demand destruction has resurfaced after the Fed raised interest rates by a massive 75 basis points last week in an attempt to get a handle on soaring inflation.

Persistently high oil prices has threatened to reduce aggregate consumption of the commodity as individuals, corporates tighten their wallets and reduce fuel purchases. EU sanctions imposed on Russian oil exports and an already constrained supply chain has exacerbated the situation. In addition, OPEC’s waning spare capacity adds further upside pressure on prices when you consider that the organization has been unable to meet prior production targets.

The International Energy Agency (IEA) released its oil market report for June 2022 and sees demand growth picking up in 2023 after an initial drop, rising above pre-pandemic levels of demand of 101.6 million barrels per day (bpd). The recovery in demand is forecast to be driven by a return to Chinese economic growth offsetting weaker demand from OECD countries.

WTI has continued to soften after printing the high around 123.70 when looking at the continuous CL!1 futures chart. The decline is coming into a strong zone of support (red rectangle) between 103.65 and 104.70. The zone corresponds with the ascending trendline support, the 61.8% Fibonacci level and the prior low of 103.65 that has acted as support in the past. 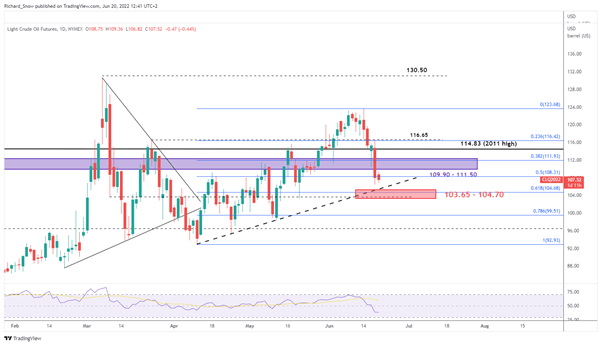 In general, client sentiment tends to shift more net-long as markets drop and that is exactly what has transpired recently. Sentiment is now close to 50/50 and therefore provides less effectiveness as a contrarian indicator. Typically, IG client sentiment provides stronger signals when markets are trending and sentiment is largely skewed in the opposite direction. 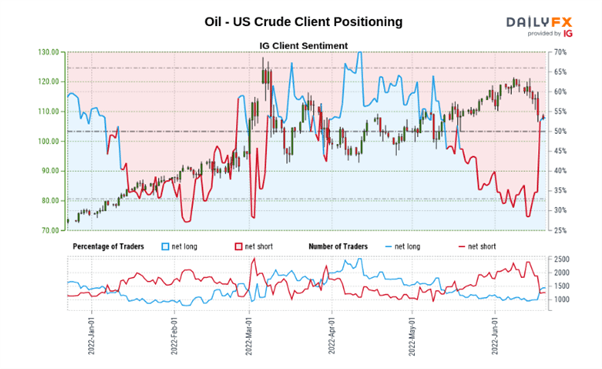 Positioning is less net-long than yesterday but more net-long from last week. The combination of current sentiment and recent changes gives us a further mixed Oil - US Crude trading bias.