OPEC and a number of non-founding nations known collectively as ‘OPEC +’ are due to discuss output targets for July taking into consideration the EU’s ban on seaborne Russian oil. Western sanctions are likely to reduce Russian production by 2-3 million barrels per day (bpd) with the Kremlin defiantly stating that banned oil will find its way to other buyers.

Increasing output in countries that have spare capacity sounds logical but is rather tricky in practice. Saudi Arabia currently produces around 10.5 million bpd but has rarely pushed production above 11 million – creating doubt as to whether the additional output is likely to get anywhere close to replace the shortfall. The only other nation with reasonable spare capacity is the UAE. According to an OPEC + source, the group is considering an increased output target for July of around 600,000 bpd for July, which has kept oil prices lower on the day. This will need to be confirmed, however.

Crude oil prices ramped up on Monday evening into the early hours of Tuesday as news of an agreed compromise on the much-deliberated Russian oil ban was confirmed. Since then, we have seen a stark drop from the recent high as OPEC decides whether the group will increase output to make up for some of Russia’s likely reduced output.

After breaking above the zone of resistance ($115.50 – $118.50), oil prices tested $120.50 (IG chart) where bullish momentum ultimately reversed. Brent crude oil has dropped below the crucial zone, this time seen as support on the way down, and trades below $114 at around $112.90 ahead of the OPEC + meeting. Support lies at the round number of $110, which could come into play if the market believes any increased capacity to offset lost Russian output is achievable. 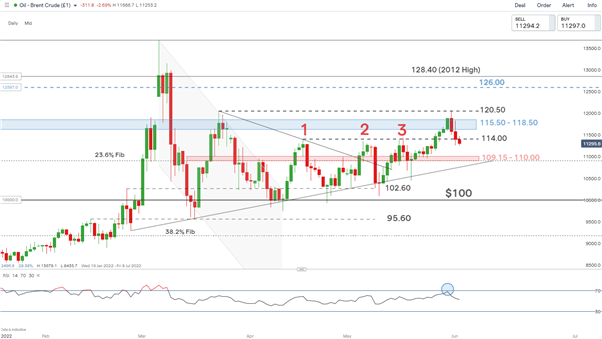 IG collects data on another tradable oil market, ‘US Crude’ which is used here as a proxy for retail oil sentiment. View sentiment data here. 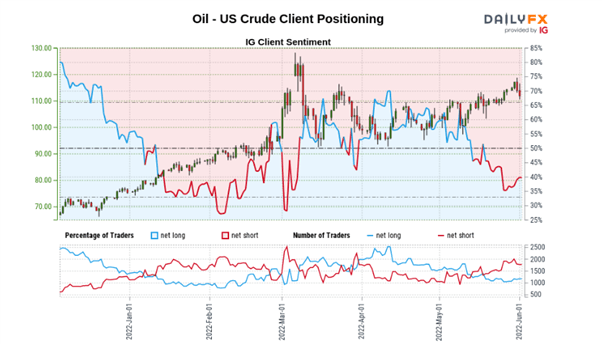 Yet traders are less net-short than yesterday and compared with last week. Recent changes in sentiment warn that the current Oil - US Crude price trend may soon reverse lower despite the fact traders remain net-short.