WTI crude and Brent oil prices are moving higher Tuesday as the European Union (EU) is said to be readying a new package of economic sanctions against Russia. The new package may further target Russia’s oil industry. The United Nations Security Council is set to discuss alleged Russian war crimes at a meeting tonight.

The accusations stem from a civilian massacre in the Ukrainian city of Bucha. The Russian army is thought to be responsible for dozens of dead civilians after retreating from the Kyiv suburb. French President Emmanuel Macron said he will try to persuade European leaders to target Russia’s oil and coal industry saying, “we can’t let it slide.”

Unlike the United States and the United Kingdom, the European Union has been hesitant to specifically target Russian energy products, although the appetite for such a move has been growing. No specifics on what that move would look like have been brought forth, but Russia exported a little over 2 million barrels of oil a day to the EU in 2021, according to data from the International Energy Agency (IEA).

A European embargo on those Russian oil exports would have a far-reaching impact on the global energy market. Moreover, the United States is reportedly considering another round of sanctions, according to comments from US national security adviser Jake Sullivan earlier this week. The US ban on Russian oil will go into full effect on April 21.

Meanwhile, the Covid lockdown in the Chinese financial hub and megacity Shanghai was extended. The lockdown, which began last Monday, was due to expire today. The extension may hit Chinese demand for oil and other commodities, especially if the current surge in cases spreads to other cities. For now, oil markets will likely remain on edge until clarity over the EU’s potential move or lack of one comes to light.

Crude oil traded above its 38.2% Fibonacci retracement level this morning after prices extended higher from the prior day when prices found support at a rising trendline. The falling 20-day Simple Moving Average appears to be capping upside, however. Meanwhile, the MACD oscillator is on the move lower while the Relative Strength Index (RSI) is rising after crossing above the 50 center point. A break above the 20-day SMA could help to propel prices higher, but upside may be limited for the time being. 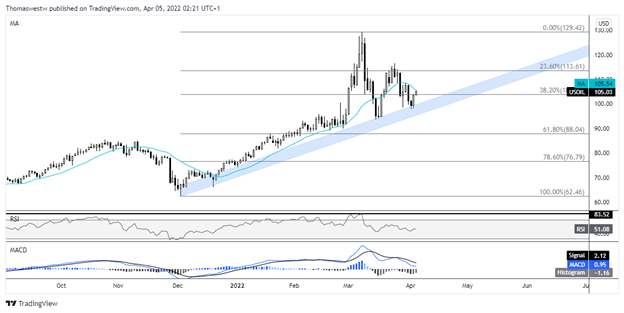