Hang Seng, CSI 300 Roar Back to Life as Beijing Pledges to Stabilize Markets

Chinese stocks soared on Tuesday as Beijing pledged to support capital markets to ease investor concerns. A Chinese state report revealed that Beijing supports Chinese stock listings in overseas markets, as fears were growing over potential delistings in US markets. Beijing also pledged support for turbulent capital markets and the beaten down property sector in an effort to ease global concern(s) about investing in China. Vice Premier Liu He also revealed that U.S. and Chinese regulators were making progress on a cooperation plan for U.S. listed Chinese companies.

Despite recent Covid headwinds across the country, mainland equities and Hong Kong markets ripped higher following the fresh developments out of Beijing. Tencent rose 23% while Alibaba soared by 27%. The Hang Seng Index posted its best session since October 2008, closing 9.08% higher. Despite these strong gains during Tuesday’s session, the Hang Seng remains down more than 2% on the week. China’s benchmark CSI 300 Index jumped 4.3% as well. 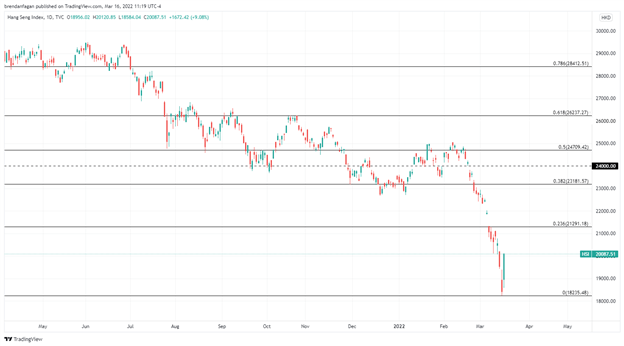 Sentiment in the region has been weak of late, as China battles its largest Covid outbreak since the start of the pandemic. Major cities have curbed activity, with lockdowns coming back into effect. Additionally, a recent report from the Wall Street Journal revealed Tencent may be facing a record fine for violating AML (anti-money laundering) rules. As previously mentioned, Chinese stocks listed in the United States have come under increased scrutiny of late, as U.S. regulators continue to press their Chinese counterparts over a myriad of disagreements.

Tuesday’s developments in Beijing could be a turning point for the country’s markets following the recent tumble. As the Fed looks set to embark upon its journey to normal policy, China’s willingness to support markets and the broader economy could make it an appealing investment proposition. With economic data still relatively strong, an environment of easy monetary conditions could allow for Chinese risk-assets to thrive. While domestic and geopolitical risks do remain, tactical opportunities may arise in China following these most recent developments.