Russian President Vladimir Putin yesterday recognized breakaway Ukrainian republics Donetsk and Luhansk as independent and sent in troops, or in Russia’s words, a ‘peacekeeping force’, fueling fears that the conflict in East Europe will continue. Russia will now likely build military positions in these regions, increasing tensions in Ukraine, and adding to fears that Monday’s move was the start of a longer-term takeover of Ukraine. The US and Europe are set to announce sanctions shortly against the two separatist-run regions in Ukraine and will also target Russian interest in their regions.

Oil remains strongly bid in the current environment and will remain so, although it is unlikely that Russian oil and gas supply will be affected by any upcoming sanctions. Russia is the main EU supplier of crude oil, natural gas, and solid fossil fuels. In 2019 the EU imported 41% of its natural gas from Russia along with over 46% of its solid fuels and nearly 27% of its crude oil. Italian Prime Minister Mario Draghi stated last week that any EU sanctions should not target the energy sector, as the country tries to curb runaway energy inflation.

Brent crude currently trades around $96.50/bbl. a seven-year high and is closing in on the headline-making $100/bbl. level. While this level may act as resistance in the short term, it is unlikely to hold oil back for too long, especially if Russia disrupts supply in response to any sanctions. The monthly price chart shows Brent crude entering a multi-year period when oil traded in a $95/bbl. and $128/bbl. 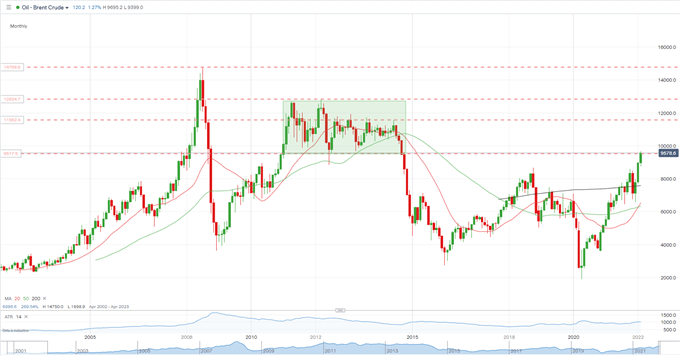 We typically take a contrarian view to crowd sentiment, and the fact traders are net-short suggests Oil - US Crude prices may continue to rise. Positioning is more net-short than yesterday but less net-short from last week. The combination of current sentiment and recent changes gives us a further mixed Oil - US Crude trading bias.

What is your view on Crude Oil – bullish or bearish?? You can let us know via the form at the end of this piece or you can contact the author via Twitter @nickcawley1.