A slow start to the week with the US celebrating Martin Luther King Day will likely pick up for cable traders with a host of heavyweight economic data releases set to be released. On Tuesday the latest jobs and earnings data (November), Wednesday sees the release of the December inflation numbers, while at the end of the week the latest look at the UK high street with December retail sales report. All three releases have the potential to move Sterling and should be closely watched.

UK Prime Minister is set for a potentially tricky week ahead with the publication of the findings of senior civil servant Sue Gray’s ‘partygate’ investigation. UK PM Boris Johnson is under increasing pressure to resign from some within his own party, while others are rallying around the PM and giving him public statements of support in a coordinated effort called ‘Operation Save Big Dog’. While details remain sketchy, it seems likely that some senior civil servants will lose their jobs over the lockdown-breaking parties in an attempt to shore up support for the PM.

GBP/USD broke through the medium-term downtrend last week with relative ease and traded at a fresh multi-week high of 1.3750 last Thursday before fading lower. While Sterling is currently strong, a lot of the recent moves in cable have been prompted by the changes in value of the US dollar. Going into the year, market positioning for the US dollar was heavily long on increased expectations of monetary tightening in the US grew. The greenback has weakened of late however as some of these long bets were unwound, allowing cable to press further ahead. The dollar looks to have a level of support and GBPUSD is now likely to be moved by UK data and politics rather than by US monetary policy expectations. Cable has decent support all the way back down to 1.3570, while the late-October triple high at 1.3835 may prove a difficult hurdle to overcome in the short term. 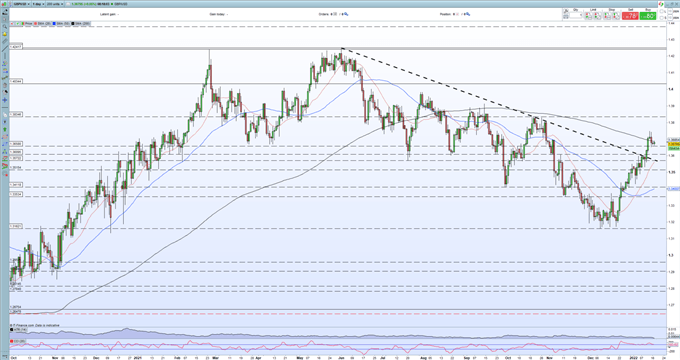 We typically take a contrarian view to crowd sentiment, and the fact traders are net-short suggests GBP/USD prices may continue to rise. Positioning is less net-short than yesterday but more net-short from last week. The combination of current sentiment and recent changes gives us a further mixed GBP/USD trading bias.