The European Central Bank (ECB) have thus far remained the most accommodative of the major central banks and now have added complexity to their task with the recent spread of COVID-19 throughout the Euro area. Persistent high inflation in the continues to plague the region, and is unlikely to soften with cold temperatures projected for the winter months (higher energy demands). The spread of the virus is expected to compound the problem in relation to slower economic growth, sparking the stagflation debate once more. Simply put, rate hikes could help slow inflationary pressure but would come at the cost of a higher cost of borrowing, putting further pressure on households and businesses – limiting economic growth.

Another headwind facing the Euro is the fact that the Pandemic Emergency Purchase Programme (PEPP) which is scheduled to end in March of 2022 is set to be unaffected by virus which does not bode well for the economy should the situation get worse.

Germany’s Ifo Business Climate (NOV) release and the GfK Consumer Confidence (DEC) acts as a barometer for the Euro area and with both events missing, indicates the weary outlook by market participants.

Later today (see calendar below), ECB minutes will be released from the November meeting. Investors will be closely scrutinizing details around asset purchases and rate hikes.

IS THE DOLLAR RALLY FADING?

This week has been all about the U.S. dollar with markets focusing in on selected economic data to push the greenback higher. Yesterday, the initial jobless claims print overshadowed other data misses while the FOMC minutes provided additional bullish fervor as the Fed’s willingness to hasten the QE taper should the need arise. Although the minutes are somewhat lagged, the message has been received by markets post-release with the dollar ticking higher however, the dollar gapped lower this morning as markets may have been overexuberant on the back of yesterdays announcements. High-spirited dollar bulls may be disappointed short-term as I think there may be a slight correction but the fundamental picture in Europe against the U.S. is distinctly divergent. Ceteris paribus, the difference between EUR and USD fundamentals should see long-term gains for the greenback against the Euro. This year alone the Euro is roughly 8.3% down on the dollar making it the 3rd worst performing G10 currency. 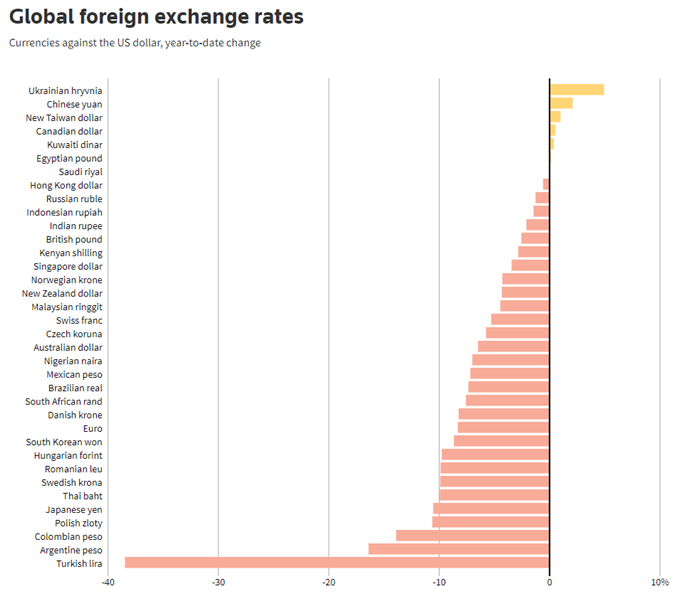 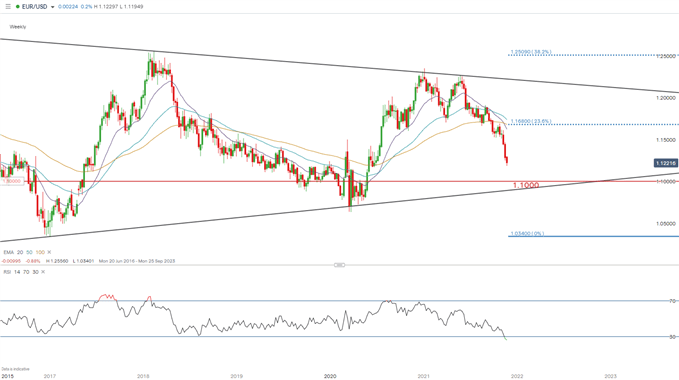 The broader picture shows EUR/USD trading within a triangle formation (symmetrical) – pattern that favors neither bulls nor bears. The symmetrical triangle traditionally gives markets an insight to a directional bias once a breakout occurs. In this case, a break below triangle support has greater credibility at this point. The weekly chart above also shows the potential for further downside towards the 1.1000 psychological level. By year end it will not be surprising if this level is being brought into consideration. 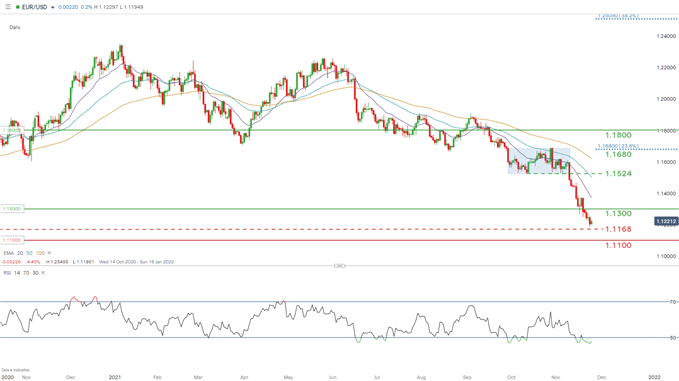 EUR bulls have managed to claw back some lost ground, finding support slightly ahead of swing support at 1.1168 (June 2020). Downside price action has moved relatively far from the 20-day EMA (purple) which could suggest mean reversion short-term. Current levels may also reflect profit taking for bears and could resume the downtrend once more attractive short levels become apparent.

The Relative Strength Index (RSI) has been lingering in oversold territory since last week and may add extra support for the correction narrative mentioned above.

IGCS shows retail traders are currently distinctly long on EUR/USD, with 72.36% of traders currently holding long positions (as of this writing). At DailyFX we typically take a contrarian view to crowd sentiment and the fact traders are net-long is suggestive of a bearish inclination however, the recent net changes in longs and shorts point to a mixed disposition.