The New Zealand Dollar saw volatile trading, with a bias to the downside, against the US after the Reserve Bank of New Zealand (RBNZ) opted to increase its benchmark rate. The central bank increased its official cash rate (OCR) by 25 basis points, in line with analysts’ expectations. The OCR now stands at 0.75%, which is 50 basis points higher than the post-pandemic low. The NZD weakness may be due to some outsized bets that called for a 50 bps hike.

However, a faster rate tightening cycle was also laid out by the RBNZ as rising prices pressure central bank leaders. The RBNZ now projects a 2% OCT by the end of 2022. The island nation’s inflation rate is at 4.9% and inflation expectations hit the highest level in nearly 10 years, according to a survey released earlier this month. The faster rate hiking forecast may help temper some of those price gains, particularly in the housing market, where mortgage rates have already seen a steep increase.

Inflation and job growth will remain key for policymakers in the coming months, but as of now, the course appears to be on a trajectory to remove additional stimulus. This was the last rate decision of the year, with the next in February. The Kiwi Dollar will likely remain sensitive to economic data concerning the labor market and prices. Next, traders will shift focus to US inflation data due out tonight via the personal consumption expenditures price index (PCE). NZD/USD may see more downside if that print beats the consensus analysts’ estimate at 4.1% Y/Y for the core reading.

NZD/USD may have more room to drop as prices accelerate lower through the APAC session. A recent bearish crossover between the 20-day Simple Moving Average (SMA) and the 200-day SMA has added bearish overtones to the technical outlook. The late-September swing low at 0.6859 may be on the table at the current trajectory. 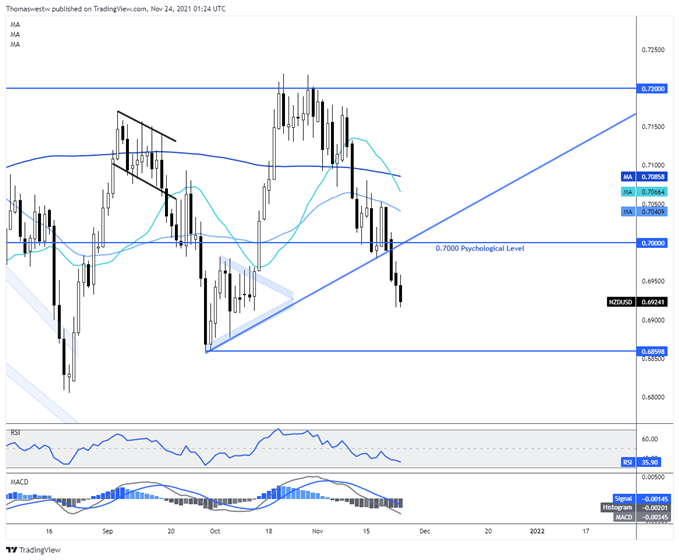