On Thursday 11 November the newly appointed Finance Minister Enoch Godongwana will deliver the MTBPS (forecasted fiscal policy outlook), watched closely by local and foreign investors alike. The depreciating state of the economy has been somewhat obscured by ballooning commodity prices resulting in positive current account figures (yellow) however, inflation (blue) has closely followed while the rand exhibits marked gains against the U.S. dollar during the same period. This period of “improvement” should not be mistaken for local/fiscal policies but rather a biproduct of the external financial market environment.

Current concerns will revolve around the local power utility Eskom (loadshedding) and other State Owned Enterprises (SOEs), fiscal spending, wage bills, government debt and the steps government are looking to take to promote future economic growth. Mr Godongwana will need to reaffirm investor confidence by navigating the aforementioned challenges with dexterity and clarity. Interested parties will sniff out any ‘beating around the bush’ which the Finance Minister should look to avoid.

Earlier this week China released it’s balance of trade data for October (see calendar below) which revealed a positive rise in exports but a lesser than expected import figure. Many factors are at play but transportation delays were of principal influence. The environment for this trend to continue is high as demand for Chinese exports are likely to remain elevated with festive periods approaching around the world. From a Chinese perspective, this should lead to further trade surplus figures but South Africans exporters (and the rand) may feel the pinch with lesser volume of commodity exports. 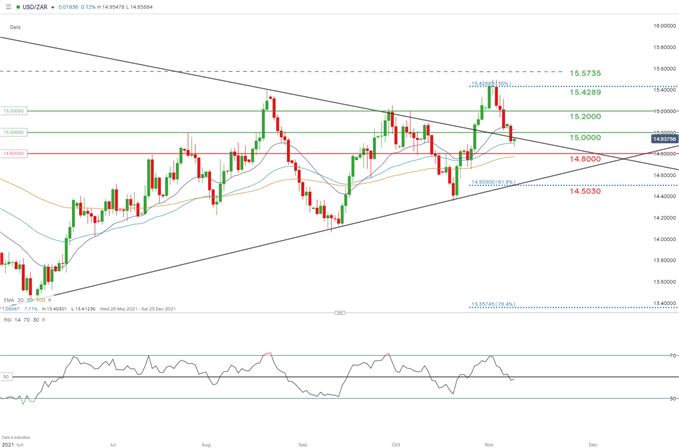 The key 15.0000 psychological level coinciding with the long-term triangle resistance trendline (black) are going to provide important indication for the future of the USD/ZAR pair. A sharp turn off the 15.4289 50% Fibonacci resistance level was followed by a succession of key level breaks. The short-term downtrend has been exacerbated by the weaker dollar after the Fed decided not to hike rates last week. The MTBPS should give some near term directional guidance but dollar influences will continue to have significant sway over the pair.

The Relative Strength Index (RSI) has pushed below the 50 level which encourages further downside momentum and may bring the triangle support trendline and 14.5030 61.8% Fibonacci into consideration should the bearish momentum persist.