The Japanese Yen is trading marginally higher today against the U.S. dollar after a relatively dovish Fed announcement yesterday. Anticipation around tightening was quelled by Fed Chair Jerome Powell as he mentioned supply chain constraints and inflationary pressure will ease with time suggestive of a more patient approach. Tapering was declared as expected which has not (as of yet) caused any radical market reaction previously seen in 2013 during the aptly named “taper tantrum”. This being said, the fundamental environment remains supportive for the U.S. dollar going forward and should only increase as the threat of rate hikes increase in the future – data dependent.

This morning Japanese PMI prints were released which came in above the 50 level which generally refers to an expanding services sector (see calendar below). These positive numbers helped support Yen bulls but may quickly turnaround tomorrow in the event of strong NFP data. 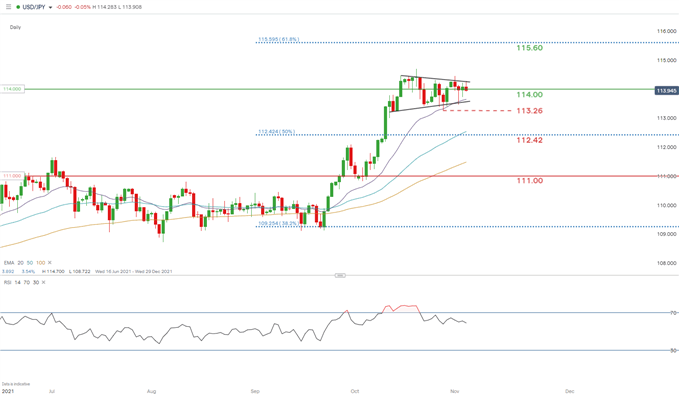 The 114.00 horizontal level has proved to be a vital measure of the USD/JPY pair. It has served as resistance and support at important junctures throughout history and this time is no different. A break above the 114.00 level, sanctioned by a break above consolidation resistance (black) would likely result in a strong bullish uptick towards the 61.8% Fibonacci at 115.60– Fibonacci taken from June 2015 high to June 2016 low.

A push below consolidation support (black) may bring in the subsequent support targets into consideration. Although USD/JPY has recently come out of the overbought region of the Relative Strength Index (RSI), it may not be wise to look for moves against the strong uptrend.

From a mean reversion perspective, price action reflects a substantial gap between the 200- day EMA (yellow) which could lead to a pullback after which a likely extension of the current upside momentum will resume.

IGCS shows retail traders are currently net short on USD/JPY, with 69% of traders currently holding short positions (as of this writing). At DailyFX we take a contrarian view on sentiment which suggests further upside on the pair however, the net change (daily) in long positions outweigh shorts which result in a mixed disposition.