Gold prices have been steadily increasing as the tug of war between rising global inflation and rising Treasury yields continue. Bullion is often considered as a hedge against rising inflation however the rate of price appreciation is quite minimal in comparison to cryptocurrencies which are reaching all-time-highs. It seems as if market participants may be swapping out gold for the crypto market as an alternative inflation hedge.

Focusing on gold for now, it could be that the current inflationary pressure is outweighing rising treasury yields. COVID-19 fears has somewhat subsided relative to prior months which has diminished the safe-haven appeal for the yellow metal. 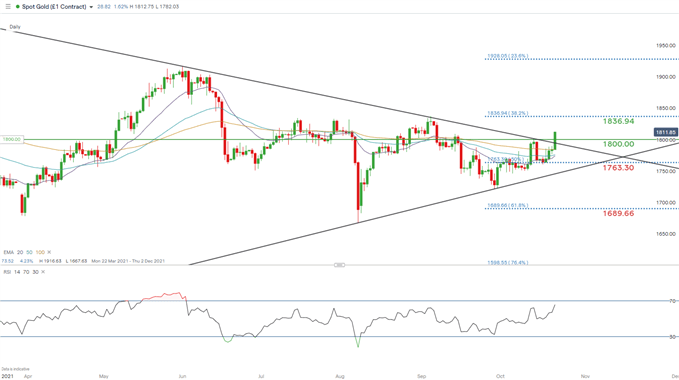 The European Central Bank (ECB) will announce their interest rate decision next week (see calendar below) which is likely to remain unchanged as confirmed by the Reuters poll in the graphic below.

The ECB’s current dovish approach may be under threat as inflation pressure rises, most recently exacerbated by soaring energy prices in Europe. Although this has been evident many weeks already, the second-round effects may still be forthcoming in future data. ECB officials are now being divided by the strong headwinds facing their current policy outlook and could lead to a revision of rate hikes going forward. This could have bullish undertone for the Euro after a dismal year against the U.S. dollar. 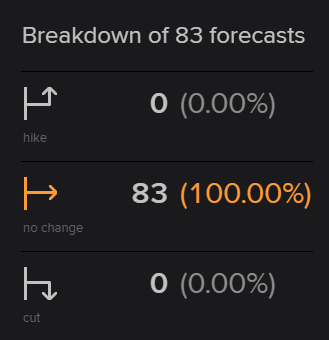 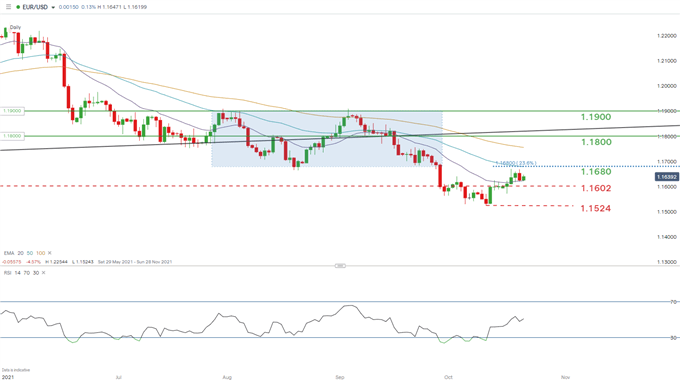 The daily EUR/USD chart above shows the recent depreciation of the Euro against the greenback. After the rectangle breakout (blue), the Euro has found support at 1.1524 making a swift recovery towards the 23.6% Fibonacci level at 1.1680. A confirmation candle close above this Fibonacci resistance level could open up room towards 1.1800. Similarly, a break below 1.1602 could result in further downside towards 1.1524.

The Relative Strength Index (RSI) does not favor any particular direction at this point, maybe slight upside but nothing convincing. The aforementioned potential key level breaks will display on the RSI giving further indication on short-term momentum.

U.S. equities have shrugged off prior concerns regarding inflation and supply chain holdups after several major stocks exceeded earnings estimates. Many companies reported successfully passing on additional costs to the end consumer thus boosting revenue numbers. Present high consumer demand is allowing for this relationship to prosper but the sustained level of inflationary pressure and lesser central bank support may lead to longer-term detrimental impacts on the SPX index and its constituents.

U.S. 10-year Treasury yields continue to ascend which traditionally does not favor tech stocks. Once earnings have been digested by markets (factoring in higher yields), we may say a significant drop in tech stock prices as higher yields negatively weigh on their valuations. 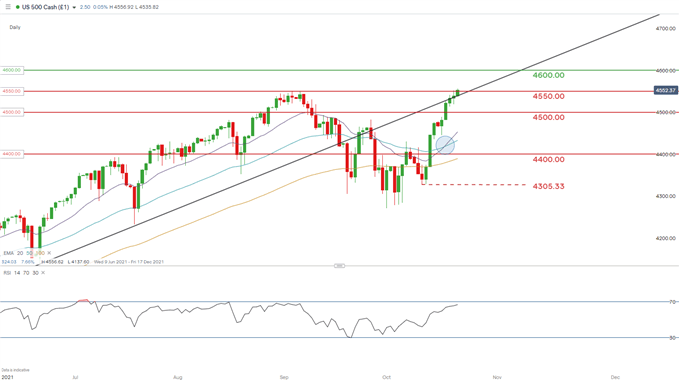 In last week’s Fintwit article, I eluded to the looming EMA bullish crossover (blue) which has since unfolded as expected. The index now trades above the long-term trendline support (black). I believe there is more upside to come (although minimal) after which we will likely see a downside correction post-earnings season which should overlap with asset tapering by the Fed.

EUR/USD Contained Ahead of NFP but Remains Sensitive to ‘Hawkish/Dovish’ Narrative Swings
2021-12-02 12:00:00
Advertisement