USD & US Rates Dip, Reprieve for Gold In Reaction to US CPI

DATA RECAP: The headline rate rose 0.5% on the month, matching expectations, which saw the yearly rate print 0.1ppts ahead of estimates at 5.4%. However, the core reading rose 0.3%, down from the 0.9% rise in the prior month and below the expected 0.4%, taking the y/y figure to 4.3% from 4.5%. Transitory factors that have been a focal point for much of the increase in inflation have begun to rollover as used cars saw a marginal rise of 0.2%. Elsewhere, more sticky measures such as shelter costs rose 0.4% from a 0.5% in June. 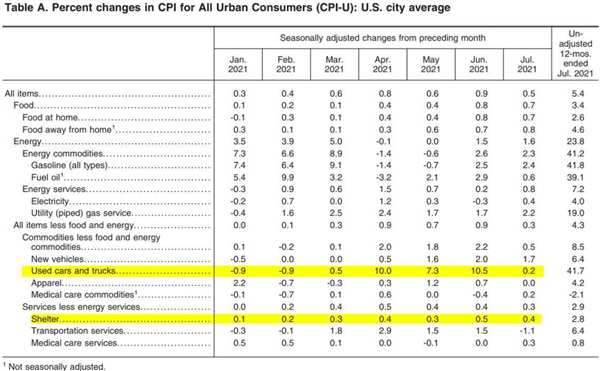 MARKET REACTION: In reaction to the CPI report, the USD initially came under pressure with USD bulls seemingly looking for an upward surprise. Similarly, US yields have also taken a hit with the 10 year falling 3bps, which in turn provided a slight reprieve for gold as the precious metal hit daily highs of 1747. That being said, with Fed Officials largely in agreement that the inflation goal has been met to taper policy, the report itself has very little implications as to the taper timeline and thus the initial reaction may well be short-lived. As I have said previously, my view is that a taper signal will be announced at the Jackson Hole Symposium at the back end of the month.

USD, US RATES & GOLD REACTION TO US CPI 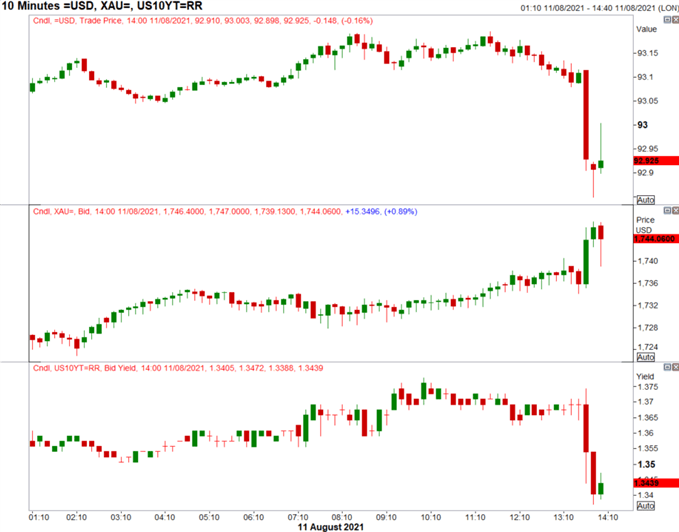 Fed’s Barkin (2021 Voter)On prices, the Fed has made substantial further progress towards benchmark. Looks like labour market has more room to run.

Fed’s Bostic (2021 Voter)Thinks Fed could start to taper purchases between October and December, but open to moving forward. Substantial further progress goal on inflation has effectively been met, could achieve on employment if there is another month or two of strong jobs gains.

Fed’s Rosengren (2022 Voter)Fed should announce in September that it will begin reducing its $120bln in purchases of Treasury and Mortgage Bonds this fall.

Fed’s Evans (2021 Voter)Would like to see a few more employment reports ahead of a decision to taper asset purchases.