Wall Street equities edged toward all-time highs on Thursday as investors digested strong corporate earnings amid revitalized reflation hopes. Asia-Pacific markets however, may continue to trail behind US peers due to the spread of the Delta variant of Covid-19 in the region.

The US earnings season has fared well so far, with around 86% of S&P 500 companies beating analysts’ EPS forecasts. 22 out of 25 companies reported earnings on Thursday have delivered positive surprises, including Twitter and Intel. Here is a quick update:

Meanwhile, weekly initial US jobless claims data fell short of expectations. Some 419k unemployment claims were filed last week, compared to a 350k estimate. The previous week’s figure was revised up to 368k from 360k. A slower-than-expected recovery in the labor market may serve to soothe tapering fears as Fed officials monitor both inflation and employment figures to set monetary policy. 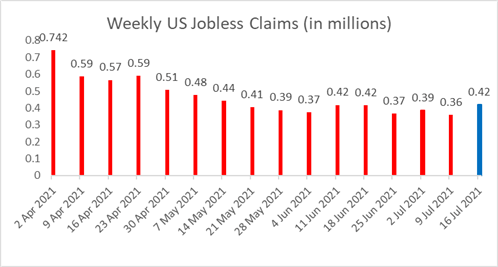 Asia-Pacific markets look set to end the week on the back foot. Futures in Australia, mainland China, Hong Kong, Taiwan, Singapore and India are in the red, whereas those in South Korea, Malaysia and Thailand are higher. Japanese markets are shut for a public holiday. 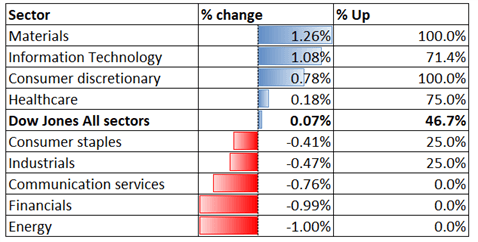 The Nasdaq 100 index is attempting to breach a key resistance level at 14,950 for a second time. A successful attempt may open the door for further upside potential, whereas a pullback may lead to a test of the 20-Day SMA line for immediate support. The MACD indicator formed a bearish crossover and trended lower, suggesting that upward momentum may be fading. 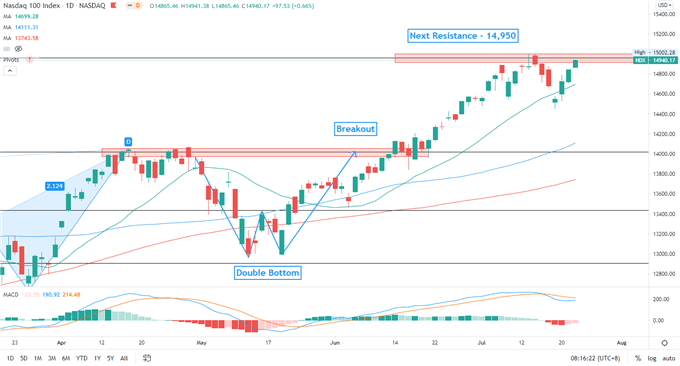 The Hang Seng Index looks set to rebound from an immediate support level of 27,150, potentially forming a “Double Bottom” chart pattern. The overall trend remains bearish-biased however, as the SMA lines have formed a “Death Cross” and trended lower. The MACD indicator is about to form a bullish crossover beneath the neutral midpoint, suggesting that near-term selling pressure may be depleting. 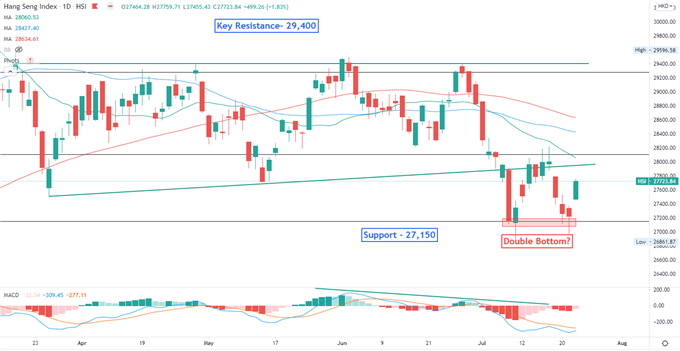 The ASX 200 index is trading in a tight range between 7,230-7,370, waiting for fresh catalysts for a breakout. The overall trend remains bullish-biased, as suggested by the consecutive higher highs and higher lows formed over the past few months. A major resistance level can be found at around 7,500. The MACD indicator is about to form a bullish crossover, suggesting that bullish momentum may be building. 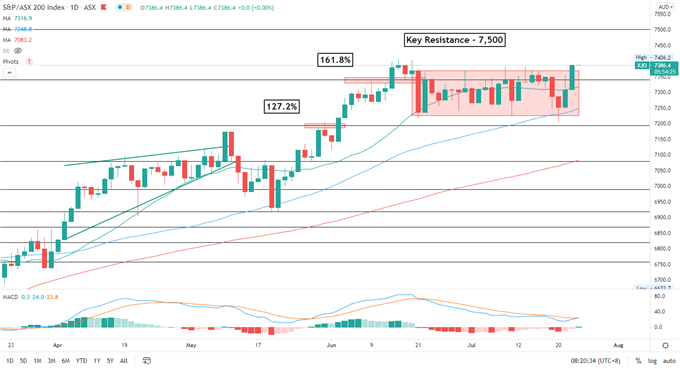