Gold prices had their worst week in more than a year, falling 6.04% as the Fed’s hawkish stance spurred a new wave of concerns about tapering. Prices stabilized at around $1,770 on Monday as the US Dollar retreated slightly from its two-month high. Some investors may take this opportunity to buy the dips, but uncertainties surrounding the Fed’s next interest rate move may continue to weigh on prices.

The June FOMC meeting forecasts signaled that two rate hikes are likely by the end of 2023 as economic recovery fathers strength and inflationary pressures intensify. Last Friday, hawkish-biased comments from St. Louis Fed President James Bullard, who will be a voting member next year,further stoked fears about rate hikes.

Bullard said he sees inflation running at 3% this year and 2.5% in 2022, which “would meet our new framework where we said we’re going to allow inflation to run above target for some time, and from there we could bring inflation down to 2% over the subsequent horizon”. This suggests that conditions may be maturing by the end of 2022 for the Fed to consider tightening, which is much earlier than market had anticipated.

A flattening US Treasury yield curve also seemingly reflects markets attempting to price in the possibility of a 2022 rate hike. The 10-2 year yield spread fell to 117.4 bps on Monday, marking a drastic decline from the recent peak of 156.8 bps seen in the end of March. Looking into the last rate-hike cycle, a rapid fall in the 10-2 year yield spread was followed by the Fed’s signal of tapering QE in 2013 (chart below). This is because near-dated yields tend to rise faster than longer-dated rates during a tapering cycle.

Gold has been riding the tailwind of ultra-low interest rate environment and central banks’ quantitative easing since the Covid-19 pandemic, and thus it may be more vulnerable to a pullback when the reverse begins. Although falling longer-dated yields and a slight retreat in the DXY US Dollar index have alleviated the selloff on Monday, the near-term momentum may still be tilted to the downside as tapering fears weigh. 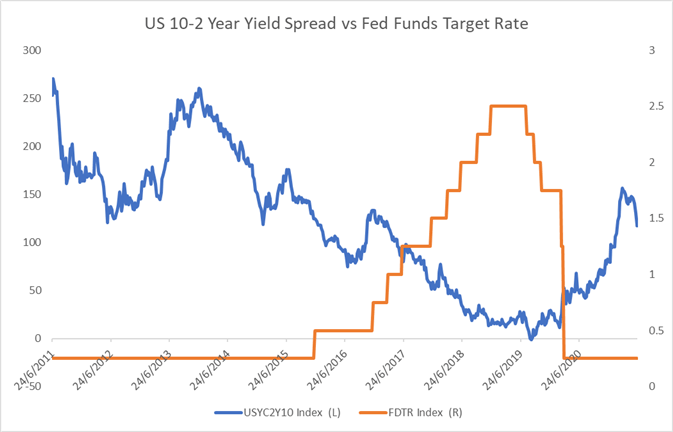 Looking ahead, US core PCE price index may be closely watched by gold traders for clues about rising price levels and their ramifications for the Fed policy. Core PCE – a gauge that Fed officials refer to as an inflation gauge - is expected to hit 3.4% for May. This will mark the highest level since 1991. An even higher figure may spur a new round of selling in the yellow metal and strengthen the US Dollar, whereas the opposite may lead to the reverse.

Technically, gold prices breacheddecisively below the floor of an “Ascending Channel” and thus entered a sharp correction. Prices may have found an immediate support at around $1,770 – the 23.6% Fibonacci retracement. Breaching this level may open the door for further losses with an eye on $1,676 for support. The MACD indicator formed a bearish crossover and trended lower, suggesting that bearish momentum is dominating. 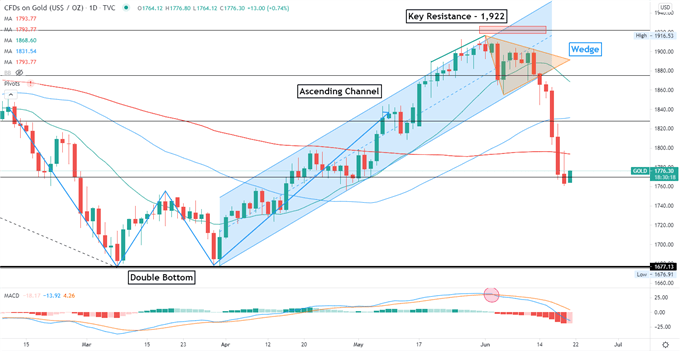