Wall Street equities closed broadly lower on Friday as a hawkish-biased comment from St. Louis Fed President James Bullard raised fears about Fed rate hikes. All Dow Jones constituents ended lower, and more than 90% of the S&P 500 companies closed in the red. Bullard said he sees inflation running at 3% this year and 2.5% in 2022, which “would meet our new framework where we said we’re going to allow inflation to run above target for some time, and from there we could bring inflation down to 2% over the subsequent horizon”.

He also highlighted that inflationary pressures were “more intense” than many Fed officials had anticipated. This could pave the way for the Fed to start raising policy rates as soon as the end of 2022, which is even earlier than an estimated timeline of 2023 as projected in the June FOMC meeting. The DXY US Dollar index extended a three-day rally to a six-week high of 92.32 before retreating slightly this morning.

The US Treasury yield curve flattened last week, reflecting a retreat in reflation bets as traders attempted to price in the possibility of a 2022 rate hike. The 2-year rate surged to 0.264% - a level not seen since April 2020. Looking into the last rate-hike cycle, a rapid fall in 10-2 year Treasury yield spread was followed by the Fed’s signal of tapering QE in 2013 (chart below).

APAC markets look set to open sharply lower following losses on Wall Street. Futures in Japan, Australia, Hong Kong, Taiwan, Singapore and Thailand in the red, while those in mainland China Malaysia and South Korea are slightly higher.Tapering fears may cap the upside for major indices, while a stronger US Dollar may entice capital to flow out from emerging markets.

Precious metals were badly hurt too, with gold prices falling over 7% during the last six trading sessions. Bitcoin, which is sensitive to liquidity conditions and interest rates, retreated to the 35k area. The ‘fear gage” VIX volatility index surged 16% to 20.7 – the highest level in a month. 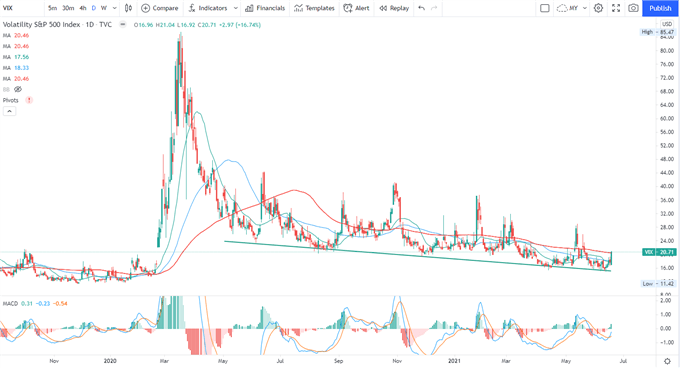 Japan’s Nikkei 225 index fell 2.7% at open, resuming its downward trajectory after a failed attempt to breach the 100-day SMA line. The Bank of Japan (BoJ) maintained accommodative monetary policy during Friday’s meeting. The central bank also launched a program to provide funds to financial institutions to address climate change, which the BoJ Governor Haruhiko Kuroda said would have “an extremely large” impact on the economy. Meanwhile, the state of emergency in Tokyo, Osaka and several other prefectures ended on Sunday as the country prepared for the upcoming Olympics.

For the week ahead, US Markit manufacturing PMI and durable goods order data dominate the economic docket alongside the BoE interest rate decision and US core PCE figures. Weekly initial jobless claims data and the University of Michigan consumer sentiment data will also be in focus. Find out more from theDailyFX calendar. 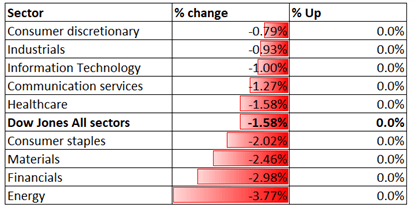 The Dow Jones index failed to breach a key resistance level of 34,920 (the 200% Fibonacci extension) and has since entered a pullback. Prices fell quickly last week, breaching below the floor of the “Ascending Channel” formed since November. This may signal a bearish trend reversal and more price weakness may follow on. An immediate support level can be found at 33,060 – the 100-day SMA line. Bearish MACD divergence suggests that upward momentum may be fading. 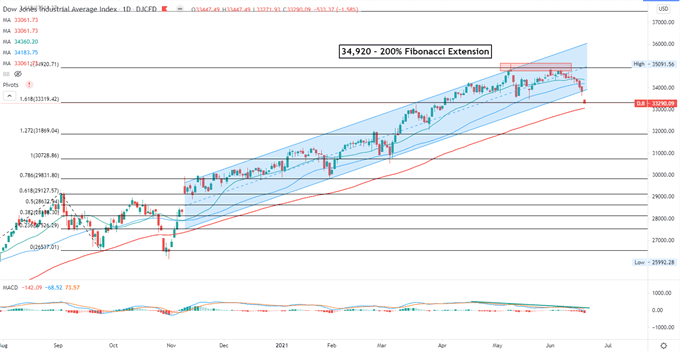 The Nikkei 225 index tumbled on Monday, falling 2.8% at open. The index fell into the “Descending Channel” and thus may resume its bearish trajectory. The 20-and 50-day SMA lines breached below the 100-day line recently, forming a “Death Cross”. The MACD indicator is forming a bearish crossover too, suggesting that bearish momentum may be dominating. 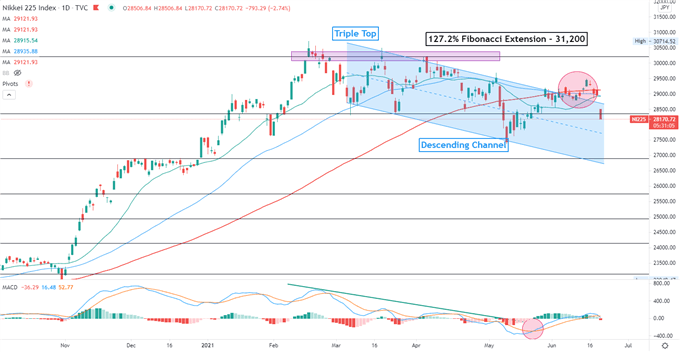 The ASX 200 index reversed lower after hitting an all-time high of 7,406 last week. The 20-day SMA line may serve as an immediate support level, followed by 7,194 – the 127.2% Fibonacci extension level. The overall trend remains bullish-biased, although a technical pullback seems to be underway. The MACD indicator is about to form a bearish crossover, suggesting that bearish momentum is building. 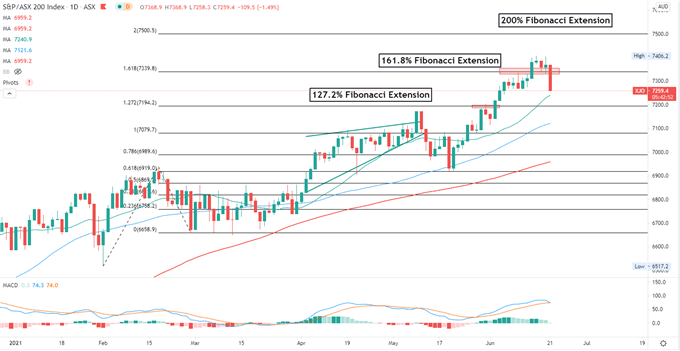