US Dollar Price Outlook: Is a USD/CAD Reversal on the Horizon?

US Dollar Price Outlook: Is a USD/CAD Reversal on the Horizon?

USD/CAD enjoyed a bounce off of support this week as broader Dollar strength helped to propel the pair higher. Gains have accumulated to create a encouragingly weekly performance thus far as the pair looks to stem a decline that has persisted since early 2020. That said, there is much more work to be done if USD/CAD is to reverse higher in earnest and there seem to be few scheduled events that could spark such a continuation higher.

Last week we noted a slight hawkish shift from the Federal Reserve could help drive US strength and a USD/CAD rally, but follow-through off the back of this theme has been minimal thus far. Upcoming Core PCE readings from the United States could influence market sentiment surrounding the Fed’s admission if inflation comes in higher than expected, but awaiting data results is far from a sound trading strategy. With that in mind, traders may have to look to technical developments to generate bullish momentum in the interim.

To that end, a break above the descending trendline from the pair’s June 2020 low would be an encouraging start and could allow USD/CAD to take aim at subsequent resistance. Secondary resistance may be encountered along the descending trendline from the pair’s 2020 peak.The levels have influenced price numerous times throughout the last year and currently trade near 1.2184 and 1.2273 respectively.

In the bigger picture, any longer-term breakout would have to pierce the zone of resistance from 1.2618 to 1.2683 before continuing higher in earnest. Given the distance from the current spot price to the barrier, however, a breakout would need to be well underway before the level is tested and momentum at such a stage may help drive price through the longstanding barrier. 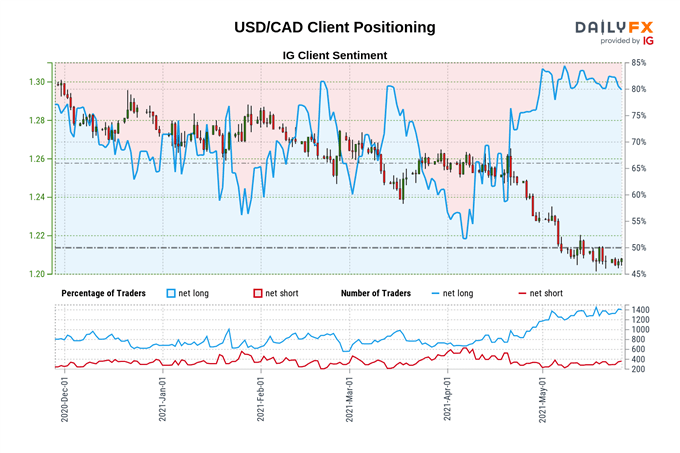 While the pair’s performance in the week thus far is encouraging and breaks higher could help generate bullish momentum, IG client sentiment data reveals retail clients are overwhelming net-long USD/CAD. In fact, the ratio of USD/CAD traders long to short is higher now than any time in the last six months. Since we typically take a contrarian view to crowd sentiment, retail positioning data may suggest the pair will continue to fall.

With that in mind, traders looking to gain bullish exposure in the US Dollar may want to look elsewhere until further topside progress is established. Once ground has been gained and momentum has shifted, the outlook for bullish USD/CAD exposure may shift favorably. On the other hand, the current risk-reward profile to the downside is largely unattractive given the reversal potential. In the meantime, follow @PeterHanksFX on Twitter for updates and analysis.

British Pound Outlook: GBP/USD Yields to US Dollar Strength, Where to Next?
Advertisement