USD/CAD was offered a brief reprieve from months of consistent selling pressure as market participants turned to Fed meeting minutes for insight. Prior to the report, USD/CAD slipped to its lowest level since September 2017 and the price chart reveals a series of lower highs and lower lows. Upon release, the FOMC minutes revealed “a couple” Fed officials expressed concern of inflation building to “unwelcomed levels.” The findings have led some investors to believe the beginning of taper talk has arrived which could prove bullish for the US Dollar.

As a result, USD/CAD has moved off its fresh lows and nearby support and might look to continue higher now that a major fundamental tailwind could pick up. Further still, recent widespread risk aversion and slipping crude oil prices could work to undermine the Canadian Dollar at a time when the US Dollar is enjoying newfound strength. Together, the fundamental forces at play could help propel USD/CAD higher as the pair looks to recover lost ground and avoid deeper declines.

That said, attempting to call a bottom after the pair just hit its lowest level since 2017 is rather presumptuous and could see traders grab a falling knife instead. Patience may be warranted and if the pair should reverse lower, support around the 1.1920 and 1.1780 levels will offer bulls an opportunity to make a stand and stave off deeper declines given the new information.

On the other hand, USD bulls eager to gain exposure will have to negotiate a plethora of resistance on the USD/CAD chart if price moves higher. Initial barriers to a continuation rally may reside around two descending trendlines around 1.2184 and 1.2273 respectively. The levels have influenced price numerous times throughout the last year and could look to do so in the future.

In the bigger picture, any longer-term breakout would have to pierce the zone of resistance from 1.2618 to 1.2683 before continuing higher in earnest. Given the distance from the current spot price to the barrier, however, it may be rather early to discuss strategy around the area. Nevertheless, traders should keep an eye on the zone if USD/CAD begins to rally. 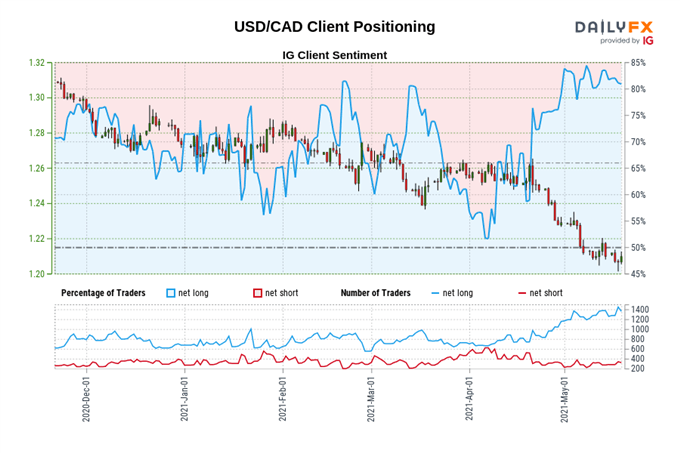 IG client sentiment data reveals retail clients are overwhelming net-long USD/CAD. In fact, the ratio of USD/CAD traders long to short is higher now than any time in the last six months. Since we typically take a contrarian view to crowd sentiment, retail positioning data may suggest the pair will continue to fall.

While the USD/CAD price chart is at an undoubtedly important junction and new information could change its trajectory, taking on exposure at this point is unattractive from a risk-reward perspective – in my opinion. USD bulls may be wise to wait for further topside progress to try their hand and bears could consider further progress beneath the 2017 low before positioning for further downside. In the meantime, follow @PeterHanksFX on Twitter for updates and analysis.