Investors eye a busy week ahead, with US earnings, RBA and BoE interest rate decisions, US and Chinese trade data, as well as US nonfarm payrolls figures in focus. Mainland Chinese markets are shut for the Labour Day holiday and will resume trading on Thursday. Japanese markets are also closed on Monday. Therefore, there will be lower liquidity and fewer participants on the first day of May in Asia-Pacific trade.

The US earnings season continued to deliver positive surprises. Around 60% of S&P 500 companies reported their Q1 results so far. Among those, more than 86% have beaten market expectations. According to data compiled by FactSet, the blended earnings growth rate for the first quarter is 45.8%, much higher than the previous forecast of 23.8%. In aggregate, companies are reporting earnings that are 22.8% above the estimates, which is far above the five-year average of 6.9%. All eleven S&P 500 sectors reported stronger-than-expected EPS growth rates, led by consumer discretionary (+181.6%), financials (+133.7%) and materials (57.1%).

This week, 139 S&P 500 companies, or 28% of the index’s constituents will release their Q1 results. Looking further ahead, analysts project double-digit earnings growth for the remaining three quarters of 2021, with a peak expected in Q2 at 58.3%. These above-average growth rates are attributed to both a faster pace of economic recovery and a low-base effect.

Asia-Pacific markets look set to kick off the week on the backfoot. Futures in Australia and Hong Kong are in the red despite a mild rebound in the US. A worsening pandemic situation in India casts a shadow over Asia-Pacific markets, as investors assess the risk of reopening delays and stricter border controls. Singapore saw a rising number of community Covid-19 cases after a cluster was found in a local hospital. The country has reinstated some social distancing rules and tightened border restrictions.

Looking ahead, RBA and BoE interest rate decisions lead the economic docket alongside trade data and US nonfarm payrolls numbers this week. Meanwhile, oil traders will eye Wednesday’s API crude inventory data for clues about the supply and demand relationship. Find out more from theDailyFX calendar. 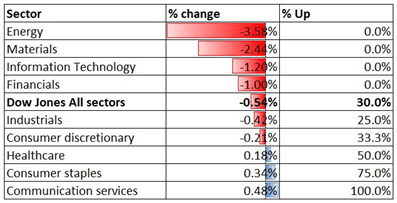 The Dow Jones index has hovered near the 127.2% Fibonacci extension level over the last two weeks, resulting in a narrowing Bollinger Band width. The MACD indicator has formed a bearish crossover and trended lower since, suggesting that upward momentum is fading. An immediate support level can be found at the 50-day SMA line (33,220), whereas 34,000 remains a key resistance.

The Hang Seng Index (HSI) broke down out of an “Ascending Triangle” chart pattern, potentially paving the way for further losses with an eye on 28,334 (the 23.6% Fibonacci retracement) for support. A large bearish candlestick formed last Friday showed strong near-term selling pressure. The MACD indicator formed a bearish crossover near the neutral midpoint, suggesting that momentum is tilted to the downside.