WTI traded slightly lower during the APAC mid-day session as viral resurgence in Japan and India set a sour tone for oil trading. Japan declared a third state of emergency in Tokyo, Osaka and two other prefectures to curb a surge in coronavirus cases. These areas account for ¼ of Japan’s population and 1/3 of its economic output. The measures started on Sunday and will be in place until at least May 11th, casting a shadow on the upcoming Tokyo Olympics.

Japan is the world’s fourth largest oil importing country, consuming around 7% of global oil exports during 2019. Therefore, reduced domestic travel and a halt of non-essential businesses could bring a considerable impact to energy consumption during the restricted period.

India reported a record increase in its daily Covid-19 infections, with 349,691 cases added over the past 24 hours. India is the world’s third largest oil importer and accounted for around 10% of global imports in 2019. A rapid surge in coronavirus infections may lead to tightened travel restrictions and could bring the country closer to a nation-wide lockdown.

Meanwhile, oil traders will keep an eye on Wednesday’s OPEC and non-OPEC ministerial meeting for clues about the supply outlook. The oil cartel and its allies have decided to add 2.25 million bpd from May to July at a meeting held on April 1st. Since then, the energy demand outlook was brightened by robust economic data from the US and China. Looking ahead, deteriorating viral situations in parts of Asia may hinder OPEC+ from considering raising output further.

Iranian oil production could be another wildcard in the oil market. Recently, the country attempted to resume talks on the 2015 nuclear deal in order to free itself from economic sanctions imposed by the US. Although the ongoing negotiations have yet to yield any fruit, the potential return of Iranian supply in the future posts a threat to the fragile supply and demand balance. 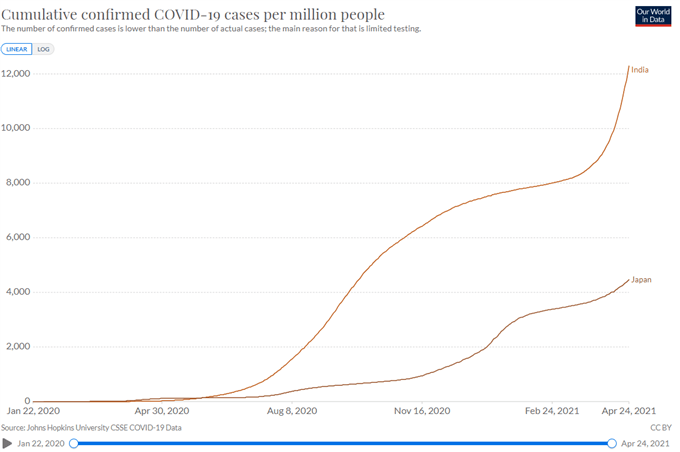 The MACD indicator has formed a bullish crossover beneath the neutral midpoint, suggesting that bullish momentum may be accumulating.