Crude oil prices traded flat during the APAC morning session despite a broad pullback in equities and commodities as the US Dollar climbed amid souring sentiment. Fed Chair Jerome Powell painted a rosy picture in an interview with CBS’s “60 Minutes”, saying that the US economy is at an “inflection point” and that growth and job creation are poised to accelerate. His comments strengthened reflation hopes and seemingly underpinned the energy demand outlook in North America.

Uncertainties remain however amid the uneven vaccine progress around the globe. Parts of Europe are facing a third viral wave and extended lockdown measures. Several emerging economies, including India and Brazil, are facing viral resurgence and a strain on their healthcare system. India reported an accelerated pace of increase in daily Covid infections, with the 7-day average hitting 124,757 on April 10th. India is the world’s third-largest oil importing country and it consumes nearly 10% of global crude oil exports. Therefore, worsening pandemic situations in the country may dampen the global oil demand outlook. 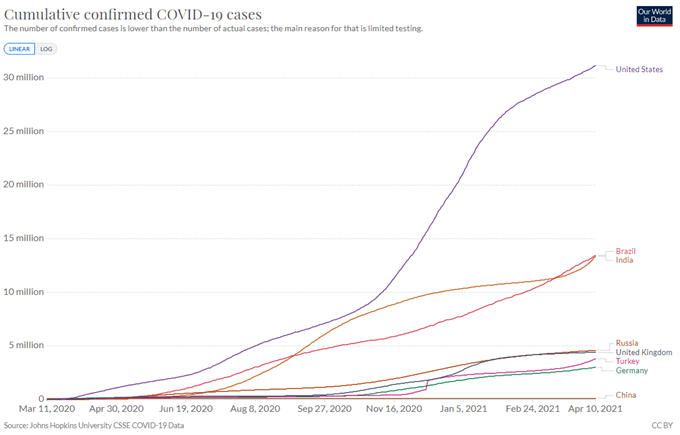 Prices face other headwinds too, including a gradual unwinding of output cuts by OPEC+ members and ongoing nuclear talks between Iran and the US. The oil cartel is planning to add 2.25 million bpd of output over the next three months to meet increasing demand, a decision that surprised markets in early April. Nuclear talks between Iran and US are set to continue this week after “constructive” progress made last week. A step forward to returning to the 2015 nuclear deal may pave way for the removal of economic sanctions imposed on Iran, which include limiting its oil exports. A full restoration of Iran’s output may add over 2 million bpd to global supply. 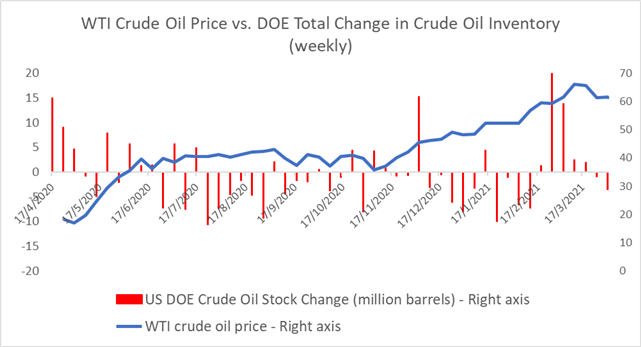 A “Head and Shoulders” chart pattern is forming on the daily chart, hinting at downside potential. The MACD indicator has formed a bearish cross over and is trending lower, underscoring downward momentum. 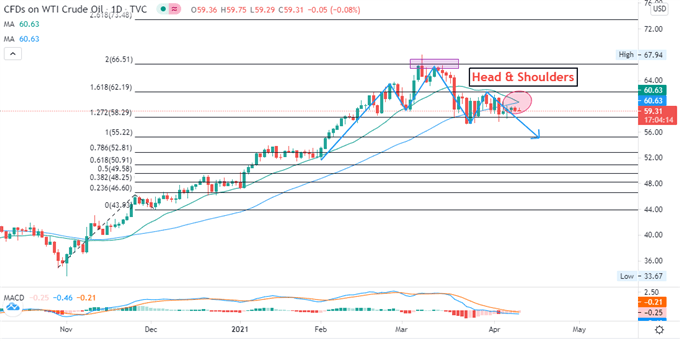