The Dow Jones and the S&P 500 index extended gains to their fresh records after the Federal Reserve reaffirmed its dovish rhetoric during Wednesday’s FOMC meeting. The VIX volatility index fell to a pre-pandemic low of 19.2 and the DXY US Dollar index retreated to a two-week low of 91.39 after the meeting. This may set a positive tone for Asia-Pacific markets as traders anticipate an accommodative monetary environment and improved recovery outlook going forward.

The Fed decided to keep the target range for the Federal Fund Rate unchanged at 0 to ¼ percent and expects it will be appropriate to maintain this level until labor market conditions have reached maximum employment and inflation has risen to 2 percent and is on track to moderately exceed that level for some time. The central bank will “continue to monitor the implications of incoming information for the economic outlook”. That said, the Fed will adopt an outcome-based approach rather than an pre-emptive approach in assessing the appropriate of monetary policy. The Fed is likely to tolerate a transitory increase in inflation and be patient.

Encouragingly, the central bank has revised up this year’s GDP growth forecast to 6.5%, a notable increase from December’s forecast of 4.2%. The unemployment rate is expected to fall to 4.5%, compared to an earlier forecast of 5.0%. Although the core PCE inflation forecast has also been revised up to above 2.0% for the next three years, the Fed fund rate projection remains unchanged. According to the dot plot, only 7 out of the 18 members see rate hikes in 2023, while 11 see no changes. 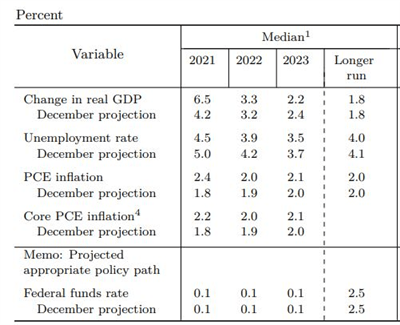 Australia’s ASX 200 index appeared to be little inspired by a robust jobs report and traded flat on Thursday open. Data from the Australian Bureau of Statistics showed that 88.7k jobs were added in February, beating consensus forecast of 30k by a wide margin. The unemployment rate fell to 5.8% from 6.3% prior, compared to a baseline forecast of 6.3%. The ASX 200 index fell slightly following the report as the Australian Dollar strengthened modestly. Energy, materials and consumer discretionary were among the better performing sectors, whereas real estate, information technology and utilities were lagging.

Looking ahead, the BoE interest rate decision and US initial jobless claims data will be in focus. Find out more from the DailyFX calendar. 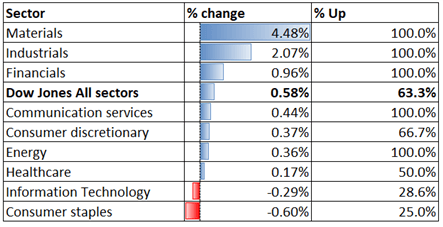 The Dow Jones indexpierced above the “Ascending Channel” formed since early November 2020 and closed at an all-time high. Breaching the ceiling of the channel may intensify near-term buying pressure and bring the 127.2% Fibonacci extension (33,954) into focus. The overall trend remains bullish-biased, as suggested by the upward-sloped moving averages. The RSI indicator penetrated above the 70 mark, signaling that the index may be temporarily overbought and thus susceptible to a technical correction.

The Nikkei 225 index is attempting to re-test a key resistance level of 30,455 – the 161.8% Fibonacci extension level. A successful attempt to breach this level may intensify near-term buying power and open the door for further upside potential towards 31,643 (the 200% Fibonacci extension). An immediate support level can be found at around 29,570 - the 20-day SMA line. The MACD indicator has formed a bullish crossover, suggesting that near-term momentum has flipped upwards. 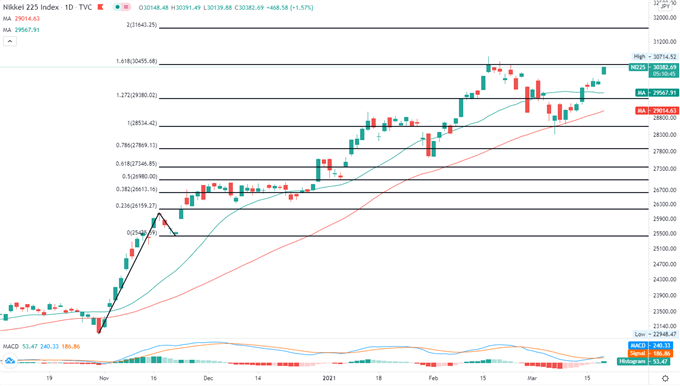 The ASX 200 index consolidated within the “Ascending Channel” formed since mid-November. A key support level can be found at 6,730, where the floor of the channel and the 100-Day Simple Moving Average (SMA) line intercept. Breaking this level may intensify near-term selling pressure and open the floor for further losses with an eye on 6,600 for support. The MACD indicator is trending lower beneath the neutral midpoint, suggesting that near-term momentum remains weak.