And once again the DAX 30 finds itself struggling to break above a key resistance but unable to capture enough sellers to bring the price significantly lower. This pattern has happened a few times before, and most recently the German index was struggling to break above 14,140, something it managed quite impressively after two months of continuous attempts. So after last week’s stellar performance, the DAX 30 seems to be unable to push beyond the 14,600 mark, something I already talked about last Friday when the Thursday candlestick painted a clear sign of indecision.

But it’s not only fierce resistance that the index is encountering as, like many times before, there is also an area of strong support, which can be found at 14,400 this time around, meaning that sideways consolidation is a high probability at this stage.

Fundamentally, we still have this backstory about rising bond yields and concerns about inflationary pressures, so equities are still looking fairly overstretched and expensive. At the forefront of the struggle are tech stocks, which have been seen as a good store of value during the uncertainty of the pandemic selloff, and are now suffering the unwind amid the reflation trade.

Whilst this is most prominent for the US, the DAX 30 is likely to be considered the European index with the highest exposure to the tech sector, which coincides with the strong outperformance of the DAX versus its European peers during the immediate aftermath of the selloff in March. Because of this, we may see the German index struggle to find further bullish support if economic conditions improve and investors continue to migrate into cyclical stocks that have underperformed during the pandemic.

And after the ECB meeting last Thursday, the focus is now on the Federal Reserve meeting tomorrow, where traders will be paying close attention to any further mention of the bond market. Jerome Powell has been pretty stern about his commentary regarding rising yield, and it is likely that he will reiterate once again that monetary policy will remain at current conditions until the foreseeable future and that increased inflation is expected as economic recovery gets underway. That said, some investors are still looking for any hint that monetary policy could be scaled back sooner than later given this rise in financing costs, so equities are likely to be sensitive throughout the rest of the week. 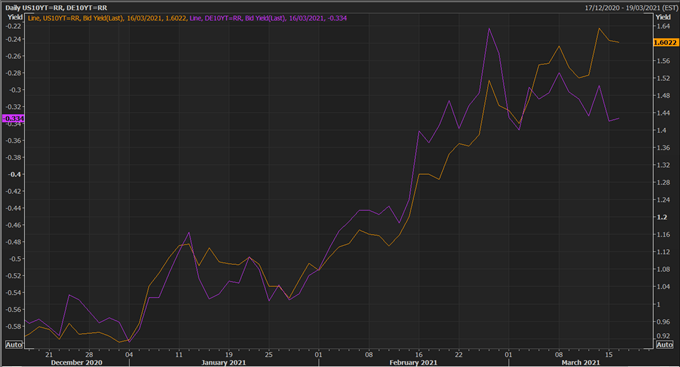 As I mentioned above, I expect 14,600 and 14,400 to be the key levels to watch out for in the short-term, as momentum seems to be stuck in this area for the time being. I also expect a bullish push to be more likely to emerge from this consolidation rather than a bearish correction, especially if the index is given some time to relax its overbought conditions. If so, 14,800 could be the next area of interest, but I reiterate that there needs to be some catalyst for bulls to attempt a push higher.

Alternatively, if bearish pressure is not contained by the 14,400 horizontal support, the next area that stands out is the previous resistance at 14,140, followed by the ascending trendline which now resides around the 14,050 area.