Gold prices edged slightly higher on Wednesday as silver prices attempted to recover some lost ground after falling over 8% on Tuesday. Enthusiasm surrounding the retail trader frenzy led to heightened volatility in silver earlier this week, but the spillover effect on other precious metals wasn’t particularly obvious. While silver prices swung as much as 20% from January 28th to February 1st, gold prices moved only 1.7% during the same period. Speculative activity on silver appeared to have cooled after the CME raised margin requirements, allowing a return of market focus on the fiscal stimulus and pandemic situations.

US lawmakers are working towards approving President Joe Biden’s US$ 1.9 trillion Covid relief aid without Republican support, as the US$ 600 billion proposal by the Republicans was deemed “way too small”. The Democrat-led Senate started a reconciliation process, which would allow them to pass Biden’s stimulus package with a simple majority and avoid a filibuster that requires at least 10 Republican votes to support the bill. Renewed stimulus hopes led longer-dated US Treasury yields to climb as expectations for future demand, output and inflation outlook rose. The 10-year rate edged up by 9 bps from a week ago to 1.109%. Higher yields may exert downward pressure over precious metal prices, which are non-yielding. 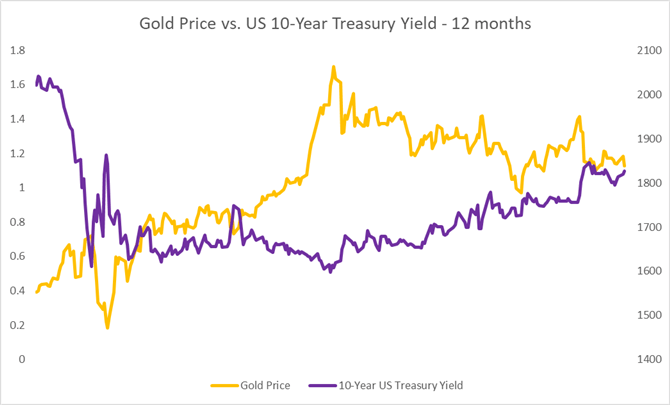 Reflation hopes may encourage investors to park their money in equities in search of yields and growth, resulting in the relative underperformance of precious metals compared to stocks. Gold prices have lagged behind the S&P 500 stock market benchmark since August 2020, and this gap may widen if the economy rebounds at a faster-than-expected pace with the rollout of Covid vaccines and more fiscal aid. 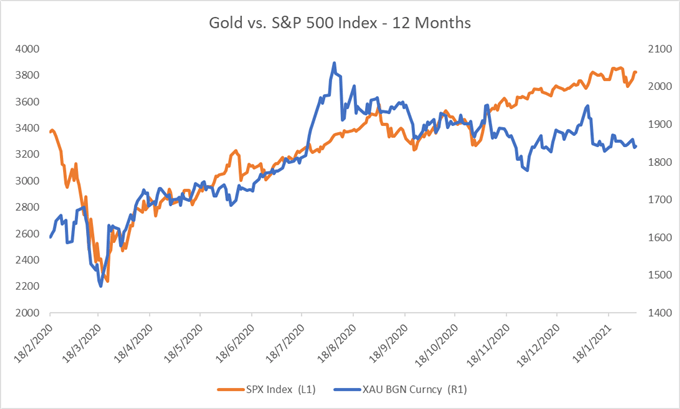 Technically, gold prices have entered ‘range-bound’ trading conditions after breaking below the “Ascending Channel” in early January, with US$ 1,810 and US$ 1,870 serving as immediate support and resistance levels respectively (chart below). The overall trend appears lack clear direction, as suggested by a flat MACD indicator .

WTI crude oil prices advanced to a 12-month high of US$ 54.93, reflecting an improved energy demand outlook as the rollout of coronavirus vaccines has appeared to be effective in bringing down the global infections. The US has vaccinated 32.22 million people, more than the total number of Covid-19 infections in the country (26.4 million). The 7-day average of daily new cases has fallen to 146,486 on February 1st from a peak of 259,564 seen on January 8th, marking a rapid decline in new infections with the rollout of vaccines. This trend may hint at a faster removal of lockdowns and normalization in business activity, buoying crude oil prices.

The American Petroleum Institute (API) reported a 4.26-million-barrel draw in crude inventories for the week ending January 29th, compared to the baseline forecast of a 0.446-milion-barrel increase. Similarly, the EIA will release the DOE crude oil inventory data on Wednesday, in which markets foresee a 2.3-million-barrel drop in stockpiles after a 9.91-million-barrel decline seen in the week before. Falling US crude inventories recently reflect a pickup in demand as economic growth gains momentum. WTI has historically displayed a negative correlation with inventories, with a 12-month correlation coefficient of -0.466 (chart below). 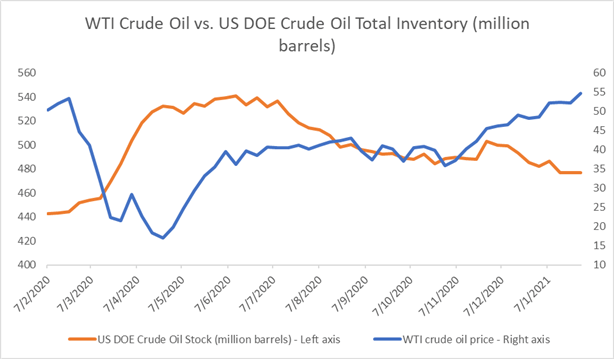 Technically, WTI breached above a “Falling Wedge” and thus opened the door for further upside potential with an eye on US$ 55.23 (161.8% Fibonacci extension) and then US$ 58.75 ( 200% Fibonacci extension). The overall trend remains bullish-biased as suggested by the upward-sloped moving average lines. The MACD indicator formed a bullish crossover, reflecting regained upward momentum.