The Reddit day-trader frenzy has spilled over to the commodity market, with silver prices surging nearly 13% within three trading days. This is after retail traders gathered on social media platform Reddit called to for a short squeeze on the metal. Futures markets saw a significant jump in silver contract volume at Monday’s open. The world’s largest silver ETF – iShare Silver Trust (SLV) – has received significant inflow since January 28th 2021 (chart below). 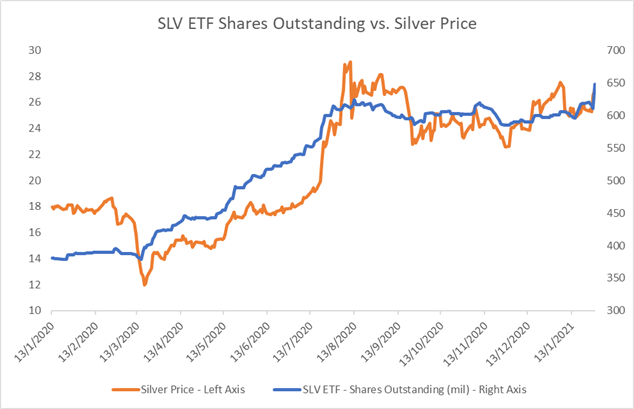 The question is, will retail traders’ success in squeezing heavily shorted stocks GME and AMC be replicable in the commodity market? The answer remains to be seen.

First of all, silver has a much larger market cap compared to single stocks, making it a lot more difficult to push up or down its prices without a substantial amount of capital or material changes in fundamentals. The amount of physical silver globally is estimated to be 1,700,000 metric tons, valued at US$ 1.42 trillion. This is approximately 1000 times that of the market cap of GameStop before its astonishing rally took place in mid-January 2021. Speculative activity may be able to drive up prices for a temporary period, but excess prices movements may encourage the return of a larger pool of buyers and sellers, Many are institutions, and eventually drive supply and demand into equilibrium again.

Secondly, silver is not heavily shorted by hedge funds, so the short-squeeze strategy that worked on single stocks may not be replicable. The Commitments of Traders (COT) reports from CFTC showed that net-long silver exposure as a share of aggregate open interest stands at 24.8% as of January 19th, suggesting that there is no significant hedge-fund short positions. WSB traders appear to be targeting physical delivery into iShares Silver Trust (SLV), which has a market cap of US$ 16.2 billion and approximately 18,700 metric tons of physical holding. The SLV ETF represents only around 1.1% of the world’s total silver reserve. There also appear to be plenty of stored silver reserves elsewhere, including central banks, trusts, pensions and the OTC market. As at end November 2020, physical silver stored within the London Bullion Market Association (LBMA) alone stood at 33,475 tones, valued at $ 23.8 billion.

Last but not least, silver exhibits historic correlation with other precious metals such as gold and their relative price relationship shouldn’t deviate too far from this baseline norm. The gold/silver ratio is a measure of the relative value of gold compared to silver, and it has been ranging between 32 to 112 over the past 15 years. The ratio is now comfortably trading at its 15-year mean of 66, pointing to plenty of leeway for silver to advance relative to the yellow metal until the ratio is pushed to the extreme low of 32. In the medium- to long-term, however, without a catch-up play in other precious metal prices, silver’s stand-alone rally may not be sustainable. 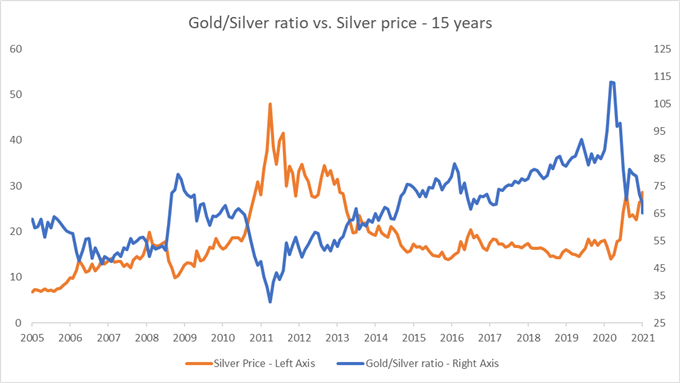 Technically, silver prices are riding a strong upward trend, with a “gap up” showing robust momentum in the near term (chart below). Prices are hitting a 76.4% Fibonacci extension level at US$ 28.67, breaking which may open the door for further upside potential with an eye on US$ 30.00 (100% Fibonacci extension). A pullback from here may lead to a decline towards US$ 27.80 and then US$ 27.00. The RSI indicator pierced above the 70.0 threshold, indicating that price might be temporarily overbought. 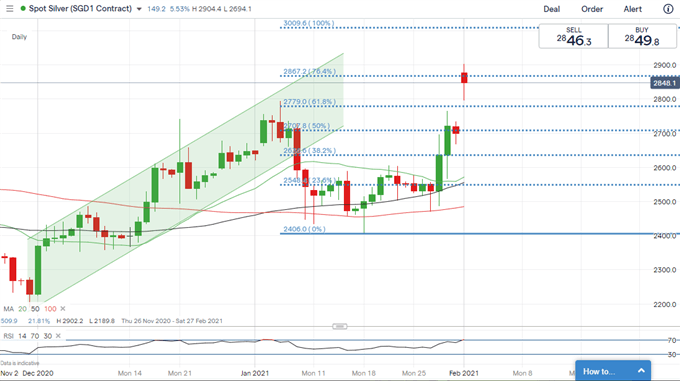 Gold prices appear to be uninspired by silver’s rally however. Technically, prices continue to range between US$ 1,810-1,870 and waiting for fresh catalysts. Breaking above US$ 1,870 will likely allow for further upside potential with an eye on US$ 1,908 (61.8% Fibonacci retracement). MACD is hovering around the centreline, reflecting a lack of price direction. 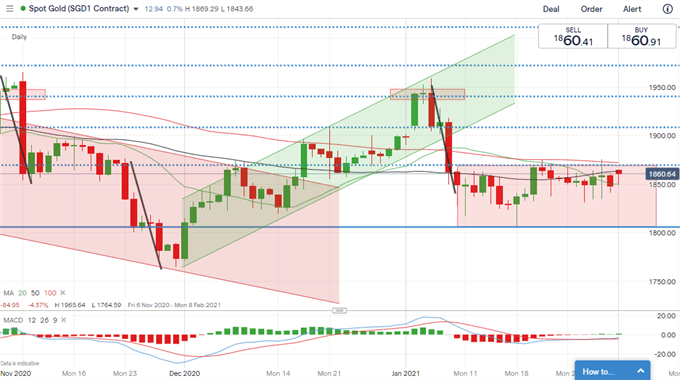