Wall Street equity indices recovered nearly half of Wednesday’s losses while the price of GME and AMC entertainment stocks tumbled following trading restrictions imposed by several retail brokerages overnight. A battle between hedge fund managers and US retail traders gathered on social media sparked a new round of profit-taking on Wall Street, but the impact could be temporary as there seems to be a lack of evidence for systemic risk to warrant a meaningful pullback in the US equity markets.

On the macro front, US Q4 GDP advanced at an annualized pace of 4% QoQ, in line with expectations. A moderate economic expansion in the fourth quarter reflects continued recovery from the sharp decline earlier last year and the lingering impact of the pandemic. Initial jobless claims fell for a second week to 847k, better than the baseline forecast of a 875k increase. New home sales grew at a slower-than-expected pace of 1.6%, missing expectation of 1.9%. 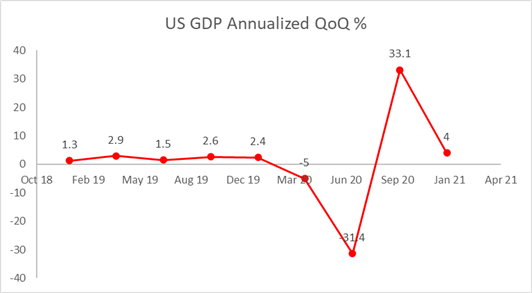 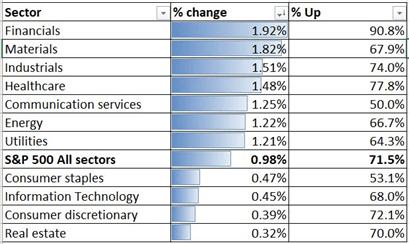 A rebound on Wall Street may set a positive tone for Asia-Pacific markets, with equity futures pointing to a higher start across Japan, Australia, Hong Kong, Singapore and India on Friday.

The Hang Seng Index (HSI) has fallen by 4.5% from its recent peak of 30,159 on January 25th, due to tightened liquidity conditions as well as receding southbound inflows this week (chart below). The PBOC has pulled out CNY 328 billion from the banking system over the past 3 days via reverse repo operations, causing tightened liquidity conditions and boosting reporates, which weighed on stock markets’ performance. 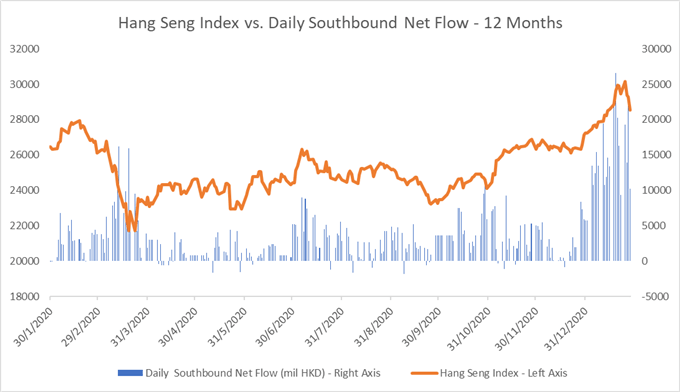 Technically, the S&P 500 index tested the 50-Day Simple Moving Average (SMA) line and rebounded. Price returned to the “Ascending Channel” and may eye the lower bound for support. The MACD indicator has formed a “Death Cross”, suggesting that downward momentum might be prevailing in the near term. Support and resistance levels can be found at 3,749 (61.8% Fibonacci extension) and 3,804 (76.4% Fibonacci extension) respectively.

The Hang Seng Index pulled back from the 127.2% Fibonacci extension level at 29,870 and has since entered a technical correction. The index is testing the 20-Day SMA for support, breaking which may lead to further losses with an eye on 28,315 – the 76.4% Fibonacci extension. Near-term momentum still favors weakness as suggested by the formation of a bearish MACD crossover. An immediate resistance level can be found at 29,040 – the 100% Fibonacci extension.

The ASX 200 index returned above the 50-Day SMA line today after registering a decent rebound. Near-term momentum remains bearish-biased however, as suggested by a weakening MACD indicator and the formation of a large bearish bar on Thursday. Immediate support and resistance levels can be found at 6,630 (161.8% Fibonacci extension) and 6,810 (200% Fibonacci extension) respectively.