2021 has been a marginally positive year for the Indian Rupee (INR) following similar trends exhibited by other Emerging Market (EM) currencies. Consensus amongst economists and analysts alike is that 2021 will be a strong year for EM’s as a global economic rebound and a pursuit for yield is expected. The Indian Rupee is not on the top of the list in terms of attractiveness amongst EM’s but, economic conditions may well support a substantial upside move nonetheless.

Last week exposed weakening industrial output figures (-1.9%) for November while inflation softened to 4.59% in December. The inflation figures come as some consolation to the poor IIP data as this suggests that previously persistent food inflation is slowing.

The potential consequence of slowing production could mean that Finance Minister Nirmala Sitharaman may be prompted to provide additional growth support mechanisms to the economy. The result could lead to further weakening of the currency however, the U.S. Dollar will likely remain the dominant influence over the medium-term.

Airlines in India have begun delivering vaccines to major cities around the country and plans are for approximately 300 million people to be vaccinated – 20% of the total population. The experience the nation has in pharmaceutical manufacturing has allowed India to be well prepared for first phase vaccine inoculations. The success of the operation will rely heavily on local states and their capacity to accurately and efficiently distribute the vaccine amongst the local population. Many states may not have the appropriate logistical and technical expertise to optimally tackle the task but support from the central government may be enough to overcome these concerns. For now, optimism around the vaccine dissemination could provide the Rupee with further stimulus to continue its path towards a prosperous 2021. 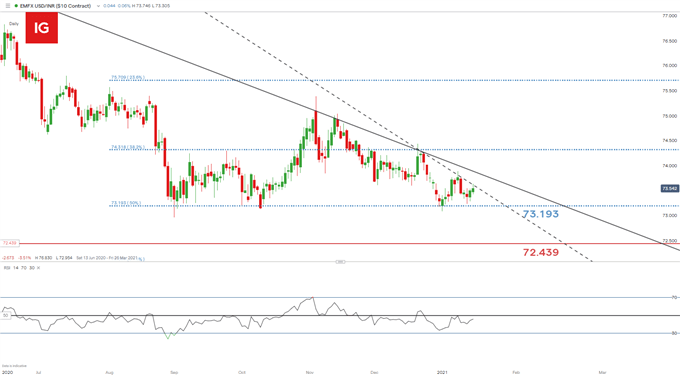 Since late August 2020, the USD/INR has respected the 73.193 support zone. January is no different with Dollar bulls unable to successfully break below. Should this level be penetrated, a significant fall could occur with the historically key November 2019 high 72.439 support zone in focus.

The Relative Strength Index (RSI) shows growing upside momentum of recent, but remains below the 50 level which is suggestive of a slight bearish bias.

With no noteworthy data out of India this week, focus will be on Fridays U.S. PMI data for January (14:45GMT) which may provide some short-term volatility, while large variations from estimates could lead to significant price swings. President-elect Biden’s inauguration on Wednesday may be another potential USD driver which could impact the pair.