Asia-Pacific stocks kicked off the week with a upbeat tone after the EU and the UK agreed to extend the Brexit talks deadline. The FDA has approved Pfizer’s vaccine for emergency use. US equity futures opened around half a percent higher, leading the Nikkei 225, ASX 200 and Hang Seng Index to trade higher.

The Brexit talks extension may offer the British Pound and broader markets some temporary relief, but little progress appeared to have been made over the past few days. With the current transition period ending on December 31st, negotiators need to tackle serious disagreements to strike a deal to avoid a no-deal outcome. Meanwhile, a bipartisan US relief package will be revealed tomorrow, although members of Congress signaled no guarantee that the bill will be passed.

The US may soon deploy coronavirus vaccines after Pfizer received FDA approval for emergency use authorization. The UK and Canada also gave the greenlight to Pfizer’s vaccine earlier this month, paving the way for a gradual rollout of vaccines with an aim to create ‘herd immunity’ within the next six months or so. Stock markets have likely priced in an initial launch of vaccines in their astonishing rally in November. Right now, more evidence to prove the vaccines’ effectiveness might need to be seen in order to give markets another boost.

The number of Covid-19 cases in the US hit a record high of 280k on December 11. This might be attributed to the Thanksgiving holiday break, during which social and travel activity surged. The alarming rate of the spread of the coronavirus may overshadow the upcoming Christmas holiday, which is a traditional peak season for retailers as demand for gifts, decorations and supplies to celebrate increases. 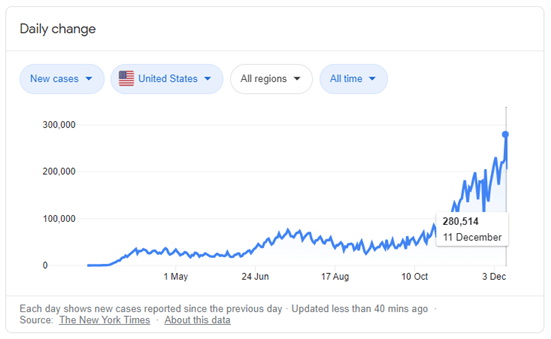 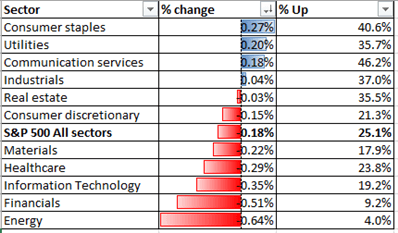 For the week ahead, Tuesday’s Chinese industrial production and retail sales growth figures may once again beat market consensus to the upside. Recent official and Caixin China manufacturing PMI figures have both hit their multi-year highs, reflecting strong recovery momentum in the world’s second-largest economy. China has also seen its trade surplus for the first 11 months of 2020 hitting $460 billion, up more than 20% from the same period of last year.

Federal Reserve officials will hold their last FOMC meeting for this year on December 15-16th, which is undoubtedly the most important event to watch among currency traders. On Thursday and Friday, a string of central bank interest rate decisions will likely set the tone for trading. Here are the key market events: 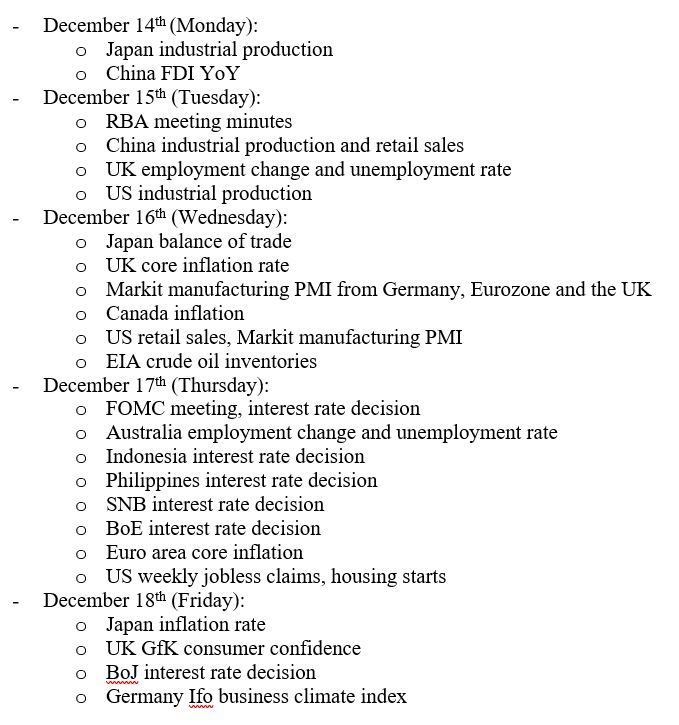 Technically, the S&P 500 index appears to be ranging higher within an “Ascending Channel” as highlighted in the chart below. The uptrend was well supported by its 20-Day Simple Moving Average (SMA) line, although some short-term pullbacks were observed. Immediate support and resistance levels can be found at 3,660 (38.2% Fibonacci extension) and 3,705 (50% Fibonacci extension) respectively.

The ASX 200 index appears to have entered range-bound market conditions too, with an immediate support and resistance levels found at 6,540 and 6,725 respectively. Traders should be vigilant about a potential MACD divergence, which could signal a trend reversal. The MACD indicator has also formed a “Death Cross”, suggesting that upward momentum is fading.