The Rand has been steadily appreciating against the US Dollar over the last few months with its attractive carry, high yielding sovereign bonds and correlation to global risk sentiment. These factors have overshadowed South Africa’s dim economic growth prospects and political instability. The market may have somewhat excluded these negative factors in the current USD/ZAR price however, as vaccines begin rolling out overseas and markets begin to steady the Rand may be exposed to its poor fundamentals.

The weak greenback has also buoyed the local currency as further stimulus may be on the horizon in the US. The Rand is largely down against other major currency pairs (EUR/ZAR and GBP/ZAR) which forms part of a larger global trend of waning EM currency strength.

Wage disputes have been plaguing South Africans over the past few weeks without any resolution. This dispute centers around increasing civil servant wages which was meant to transpire in April 2020. With the global pandemic, government coffers were strained which resulted in no increase being put into place. If the courts decide to support the unions, the government’s consolidation plans could be severely disrupted which may cause further depreciation of the Rand.

In addition to weaker economic fundamentals, the Rand may be obstructed by possible lockdown measures in COVID-19 hotspots around the country. This comes after rising cases in certain areas which is likely to provide the basis for stricter curfews and restrictions on alcohol sales. This would negatively affect the economy as December is an important time for many local businesses. President Cyril Ramaphosa should give more clarity by addressing the nation in due course. South Africa has already struggled with the initial phase of the global pandemic but can the developing nation combat a second (albeit lesser) lockdown? 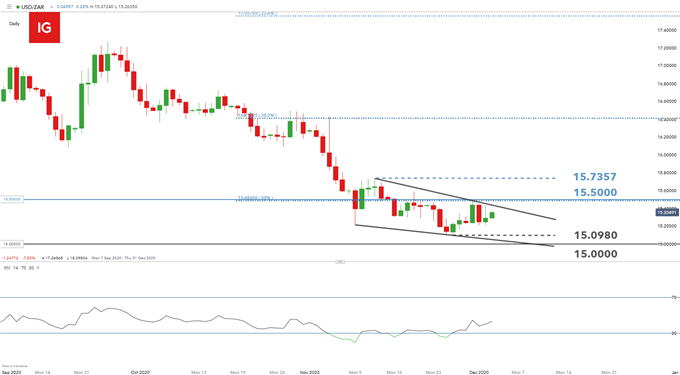 The potential for bullish divergence stated in my previous article, has since unfolded with USD/ZAR price action producing several upward sloping candles this week. The Relative Strength Index (RSI) has emerged out of oversold territory (above 30) which may hint at further upside to come although momentum remain bearish (below 50).

USD/ZAR bulls will be encouraged to see the falling wedge formation unfolding as prices approach topside resistance. Typically, the falling wedge is a bullish pattern that can indicate a continuation or reversal. The previously mentioned bullish divergence supports this reversal with recent fundamental factors potentially delivering the catalyst to back the upward move.

A confirmed break above topside resistance may see the 15.5000 zone be tested once more this week, which could lead to the recent swing high at 15.7357 as secondary resistance.

Should additional lockdown measures be overlooked and US unemployment data (see below) result in a weaker dollar, a continuation of the medium-term downward trend could ensue. The November low 15.0980 and subsequently 15.0000 horizontal levels may be viewed as support.

The first Friday of December will bring US unemployment data (13:30GMT) to the forefront and this recently volatile announcement could likely cause swings in the Dollar and consequently the USD/ZAR pair. Any major deviation from estimates (481K and 6.8%) could result in significant price swings.