Upcoming inflation data will likely dictate the New Zealand Dollar’s near term outlook, after a slew of better-than-expected economic releases call into question the need for further stimulus from an ultra-dovish Reserve Bank of New Zealand.

The RBNZ has stated that it is “actively preparing a package of additional monetary policy tools to use if needed [and] reaffirmed that a Funding for Lending Programme (FLP), a lower or negative OCR, purchases of foreign assets, and interest rate swaps remain under consideration”.

Moreover, Governor Adrian Orr has stated that he would “prefer to be battling with the quality problem of re-containing high inflation than the real challenge of battling deflation”, adding that he has asked commercial banks to prepare for the implementation of a negative interest rate policy and that there is still “plenty of room” left in the central bank’s quantitative easing (QE) program.

However, with Prime Minister Jacinda Ardern easing all coronavirus-enforced restrictions at the end of September and recent economic data showing the nation’s recovery is gathering momentum, the need for additional monetary support may not be as dire as previously thought.

New Zealand’s services and manufacturing PMI indices both expanded, and business confidence rose to its highest levels since February of this year, in September.

Nevertheless, with Assistant Governor Christian Hawkesby confirming that the RBNZ is not playing a “game of bluff” when it comes to the implementation of negative rates, further easing looks increasingly likely in the near term.

To that end, upcoming inflation data may temper easing bets in the short-term and allow the New Zealand Dollar to move higher against its major counterparts, should third-quarter figures surprise to the upside.

Conversely, a disappointing release would likely justify the need for additional action from the RBNZ and in turn significantly undermine the local currency. 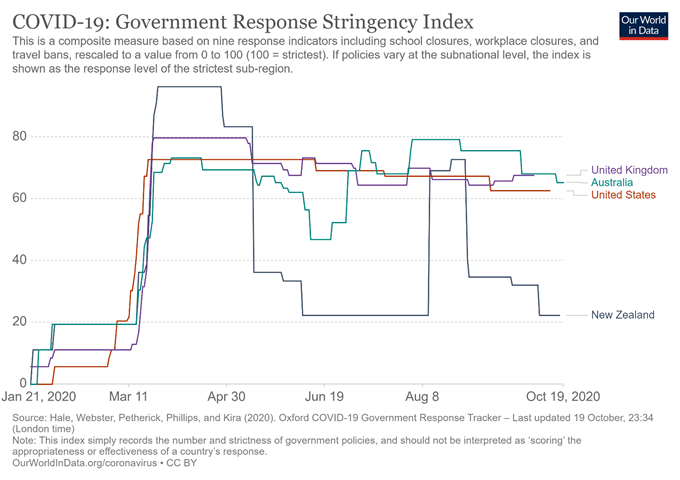 From a technical perspective, the NZD/USD exchange rate could be at risk of extending its fall from the yearly high set in September (0.6798), as price slices through support at the trend-defining 50-day moving average (0.6612) and the RSI dips back below its neutral midpoint.

A near-term pullback to confluent support at the 100-DMA (0.6552) and uptrend extending from the June 22 swing-low (0.6383) looks likely in the coming days, if the psychologically imposing 0.6600 mark continues to stifle buying pressure.

The development of the RSI and MACD indicator hint at swelling selling pressure, as both oscillators track firmly below their respective neutral midpoints.

A daily close below the sentiment-defining 200-DMA (69.37) would probably ignite a push to test the August low (68.76) and Ascending Channel support, with a break below needed to invalidate the bullish continuation pattern and bring the June low (68.16) into focus.