Indian Rupee, Nifty 50 at Risk to a US Stimulus Setback After RBI Delay

The Indian Rupee recently gained some ground against the haven-linked US Dollar. Could USD/INR resume its dominant downtrend since April? On the whole, the Rupee remains vulnerable to general risk appetite, especially after this week’s interest rate announcement from the Reserve Bank of India (RBI) was postponed. The delay was reportedly due to an appointment of 3 new members to the monetary policy committee.

The central bank was anticipated to leave its repurchasing rate unchanged at 4.00% for a second meeting in a row. The RBI has brought down its rate from 5.15% pre-Covid. It has also undertaken liquidity augmenting measures totaling about 4.6% of GDP, according to Bloomberg. After local GDP contracted almost 24% y/y in the second quarter and global growth reeling from the coronavirus. What could explain the RBI’s pause?

Look no further to than inflation, which remains remarkably high despite the often deflationary effects of a recession. The latest Indian CPI report clocked in at 6.7% y/y in August, almost unchanged from prior. This is well outside the central bank’s 2-6% tolerance range. Supply constraints have been a key factor as well as rising food costs. The latter has its beginnings from last year as an onion shortage pushed up prices.

Cutting rates to further stimulate the economy is usually inflationary, and risks further pushing CPI above target. So the RBI may continue to stand aside for the time being, but that may increase the risk of stagflation. For the time being, USD/INR remains sensitive to capital flows – see chart below. Gains in INR since April have been associated with a rise in foreign equity investment as traders chased returns.

US Fiscal Stimulus Hopes May Be Disappointed

One source of risk for INR in the near-term is fading US fiscal stimulus hopes. While the Democratic-lead House of Representatives just passed a $2.2 trillion package, it was split on party lines. As such, it may not get the Senate’s blessing. This is a recipe for disappointment and could undermine what may be a rosy outcome for September’s non-farm payrolls report. After all, markets are forward-looking. 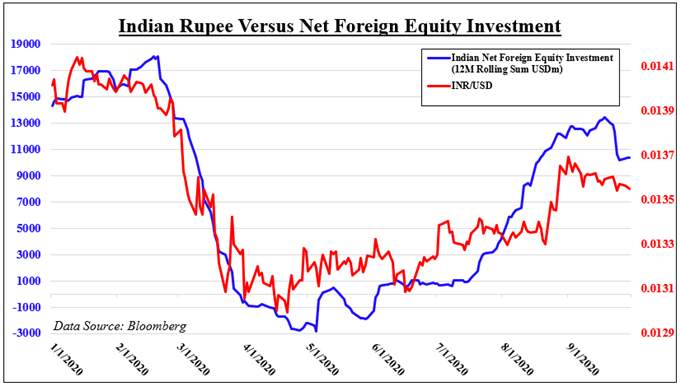 From a technical standpoint, USD/INR is attempting to resume its downtrend. Prices recently broke under short-term rising support from late August. Yet, to resume the downtrend, the 72.76 – 73.00 support zone needs to be taken out. Subsequent losses exposes the late-2019 ceiling which makes for a range between 72.14 and 72.40. In the event of a bounce, keep an eye on key resistance between 73.89 and 74.04.

India’s benchmark stock index, the Nifty 50, may turn lower after prices bounced off the former falling trend line from the beginning of this year. Now, the index has paused right on short-term falling resistance from August and it could reinstate the focus to the downside. Otherwise, a push above immediate resistance exposes the August peak at 11794.

What is the week ahead for equities?
What Do Other Traders' Buy/Sell Bets Say About Price Trends?
Register for Webinar
Join Now
Webinar Has Ended