The 2020 Indian Rupee outlook appears to favor the downside as its home country faces the threat of stagflation. It will be difficult for the Reserve Bank of India to hike without raising concerns about the banking sector. The country’s economy has taken a toll over the past two years. In the third quarter of 2019, GDP clocked in at 4.5 percent y/y which was the softest pace since 2013 and down from 9.4% in Q2 2016.

In 2018, tightening credit conditions mixed with the ongoing US-China trade war. The former was a result of four rate hikes from the Federal Reserve and an unwinding of its balance sheet. The latter led to a gradual decline in global manufacturing output and business confidence, paving the way for much of the monetary easing seen throughout the world last year.

Matching the weakest pace of local expansion in about 6 years was the largest drop in industrial production since 2009. That clocked in at -4.3% in Q3 2019 and followed the slump in global manufacturing PMI (see chart below). As concerns over future uncertainty increased, they unmasked vulnerabilities in an important sector of the economy.

Recommended by Daniel Dubrovsky
New to forex? Dive into its unique properties
Get My Guide 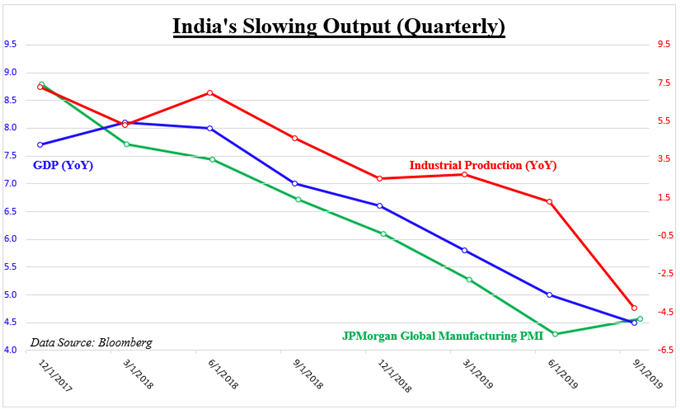 In India, it turned out to be a fragile shadow banking sector, where trouble could be traced back to 2016. Bad loans eventually paved the way to risks in the system that soured sentiment. Yes Bank, a private lending institution, saw its share price collapse over 90% from its peak in 2018 to the low in 2019. The Reserve Bank of India had to step in on multiple occasions to limit withdrawals out of small lending institutions.

As a result, credit output in the country is weakening. Growth in the total amount of corporate bonds outstanding (year-over-year) is on the decline. This is being accompanied by a slowdown in commercial credit (shown on the chart below). Moody’s cut India’s credit rating outlook to negative towards the end of last year. S&P Global Ratings highlighted the risk of contagion in the financial sector.

In fact, the RBI released a report towards the end of December where it highlighted the rising probabilities of defaults in retail loans. That is concerning for an economy where personal consumption is roughly 60 percent of GDP, according to the Central Statistic Office (CSO). These issues look like symptoms of stagnation, or slowing growth. That is the first element (out of three) in stagflation. 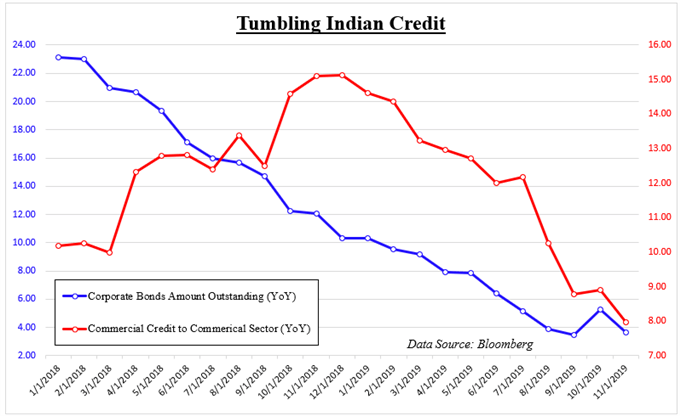 Inflation and the Indian Onion Shortage

The second element is high inflation. The ongoing Indian onion shortage comes at an unfortunate time. Onion CPI printed 144.6% y/y in November and has been on the rise since the beginning of 2019. The wide usage of this ingredient in local cuisine means that prices have generally been on the ascent. Indian headline CPI clocked in at 5.54% y/y during the same period, up from about 2.0% in January.

That was the fastest pace of price growth since July 2016. Core CPI (excluding food and fuel costs) has been on the decline however, see chart below. This speaks to weakening underlying demand as near-term noise from food and vegetable costs skews the central bank’s CPI target. The RBI has a mandate to keep headline inflation towards 4%, right in the middle of the 2 – 6% target range.

The third and final component in stagflation is a weakening labor market. According to Trading Economics, India’s unemployment rate was about 8.5 percent in October which was an all-time high. This has been steadily rising from about a 6.9% rate in January. On balance, it is shaping up to be a difficult road ahead for the world’s sixth-largest economy. 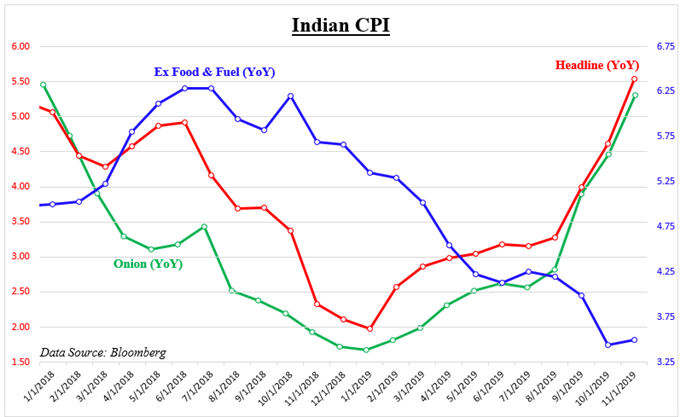 In response to these economic threats, both monetary and fiscal authorities have leaped into action to try to mitigate the risks to the outlook. The Reserve Bank of India cut its benchmark repo rate five times in 2019. Curiously, the RBI unanimously and unexpectedly refrained from a sixth reduction in December. That may have reflected concerns over temporarily elevated inflation fueled by the onion shortage.

The government delivered on corporate tax cuts in September and may outline the case for personal tax reductions this year. That has put the RBI on the sidelines for now. Governor Shaktikanta Das noted in December that policymakers are awaiting clarity on fiscal stimulus while stressing the importance of coordinating monetary and fiscal efforts.

In the near-term, the risk for India and the Rupee is that temporary inaction from the RBI puts a lid on much-needed support with GDP on the decline. The central bank’s pause towards the end of last year sent sovereign yields rallying which pushed up borrowing costs. That may further dent credit growth. This is as unemployment shows few signs of easing.

There are a couple of supportive external fundamental themes that may aid India’s recovery. For one, the US-China “phase-one” trade agreement and partial tariff unwinding is a welcome sign for global growth. Keep in mind that negotiations will head into a more difficult direction as sticky issues such as intellectual property rights and forced technology transfer are debated.

This is as the Federal Reserve may leave rates unchanged this year. Odds of hiking are not being priced in by the futures market, leaving concerns about tightening conditions off the table. That does mean that Indian policymakers will have to work harder to promote growth without the external knock-on support they saw in 2019.

A consequence of improved market mood around trade wars is the rise in sentiment-linked crude oil prices. The commodity’s ascent has also been supported by output cuts from the Organization of Petroleum Exporting Countries (OPEC). This is as US-Iran geopolitical tensions have elevated during the beginning of this year, briefly sending the commodity near peaks it saw in 2019 on supply disruption concerns.

Recommended by Daniel Dubrovsky
What is the medium-term outlook for crude oil?
Get My Guide

India imports more petroleum than it exports. This could mean lagging inflation that may down the road mute some of the anticipated decline in onion prices. A late-summer harvest is expected to increase the supply of vegetables. According to the Agricultural Produce Market Committee, prices could fall about 20 – 25 INR/kg going from the middle of January

With that in mind, the RBI may err on the side of caution on trying to fight off temporary inflation. Hiking rates could reintroduce jitters around a fragile banking system. This is as GDP and industrial output is on the decline. The risk of stagflation and the difficulty of resolving it arguably reduces the attractiveness of the Indian Rupee and may pave the way for weakness should the RBI resume easing efforts this year.

Focusing on technical analysis, the bigger picture for USD/INR seems to favor the upside. A rising support range from 2011 has been guiding the currency pair higher. Taking it out could mark a significant change to the pair’s trajectory. As always with technical analysis, confirmation is key. A descent through the 2019 low at 68.30 could pave the way for revisiting levels last seen in 2018.

If prices do indeed climb this year, a key technical point would be the 2019 peak at 72.40. Generally speaking, the Rupee has been trading sideways against the US Dollar since August of last year. Breaching the upper bound exposes the 2018 high at 74.48. If this price is taken out, it would start marking record levels of weakness against the Greenback as the pair eyes 75.25 and then 77.13 on the weekly chart below. 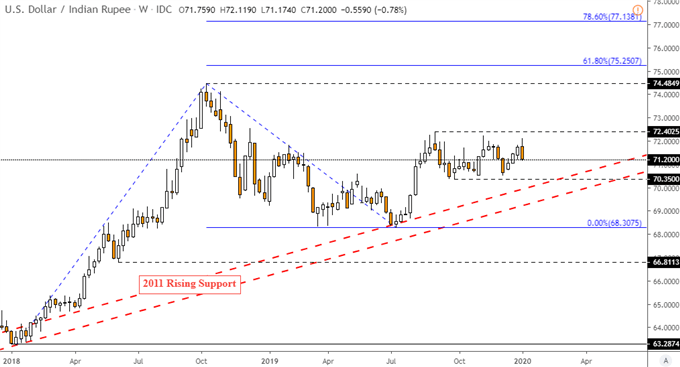