Nasdaq 100 index futures rose on Monday after climbing over 2% on Friday. This may set a positive tone for Asia-Pacific markets amid a relatively quiet calendar day. Investors are eyeing several key events this week, including the final round of Brexit talks on Monday in Brussels and the first US presidential election debate on Tuesday.

Futures in Asia-Pacific look set to edge higher following positive leads during Wall Street trade. The US Dollar, a haven-linked asset, has retraced slightly from its two-month high. A weaker US Dollar may point to a relief rebound in risk assets and commodity prices today.

Recommended by Margaret Yang, CFA
How can you overcome common pitfalls in FX trading?
Get My Guide 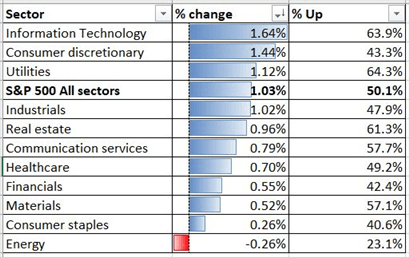 From a technical standpoint,the Nasdaq 100 index has rebounded from a key support level at 10,800 – the 100 Day Simple Moving Average (SMA) line. It may attempt to challenge immediate resistance at 11,170 - the middle line of its Bollinger Band. The Nasdaq 100 has mostly been consolidating within the lower Bollinger Band since early September, with momentum appearing to be biased towards the downside. A firm break above the middle line may signal a potential trend reversal. 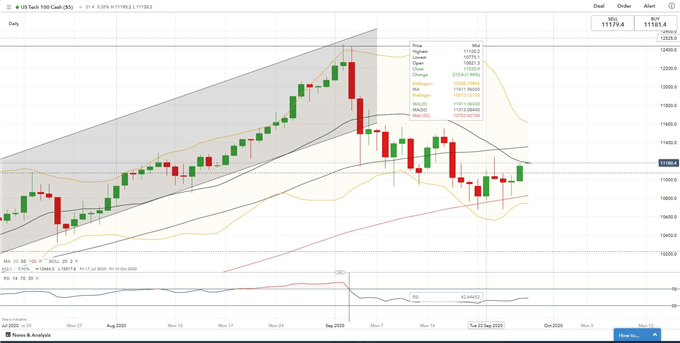 Hong Kong’s Hang Seng Index (HSI) has fallen 7.7% so far this month, making it one of the worst performing equity indices in Asia. If a slowing domestic economy and an ongoing spat between Beijing and Washington were not enough, one of China’s largest property developers is facing trouble. Evergrande (3333 HK) was reportedly facing the prospect of a liquidity crunch if an IPO approval is not obtained by the end of January. Many Chinese property developers are highly leveraged, and thus vulnerable against the tightening of regulatory measures.

India’s Nifty 50 index has recently entered a mild consolidation phase, breaking below its upward trendline (chart below). It has found some support at around 10,900 – the 200-Day SMA line. The next support level can be found at 10,730 – the 23.6% Fibonacci retracement. A deeper correction may see the index testing its 38.2% Fibonacci retracement at 10,090.