UK GDP: UK growth for July is broadly in line with expectations, albeit slightly on the softer side. For July, GDP grew 6.6%, in which the ONS reported that while UK GDP may be 18.6% higher than its April low, the UK still has to make up half of the GDP lost since the start of the pandemic. In reaction to the GDP report, the Pound saw a muted reaction on the whole. That said, going forward, in light of fiscal measures, namely the “eat out to help out” scheme, expectations are for a strong set of August figures.

EU Gives UK Ultimatum: Political uncertainty and the repricing of no-deal Brexit risks has been the main driver behind a tough week for the Pound, which has plummeted from above 1.32 to briefly trading below 1.28. As the UK looks to pass the Internal Market Bill (IMB) through parliament in the coming weeks, trust between the UK and EU has arguably hit an all-time low in this Brexit saga with the EU giving the UK an ultimatum. Either withdraw the bill by the end of the month or face possible legal action if not.

With that said, in the absence of amendments, the passing of the bill in its current form will materially increase the odds of a no-deal Brexit and thus pave the way for further losses in the Pound. This sentiment has been reflected in the options market as premiums for downside protection soars. On the technical front, the line in the sand for a move lower sits at 1.2735, which marks the 200DMA, failure to hold and 1.25 beckons. 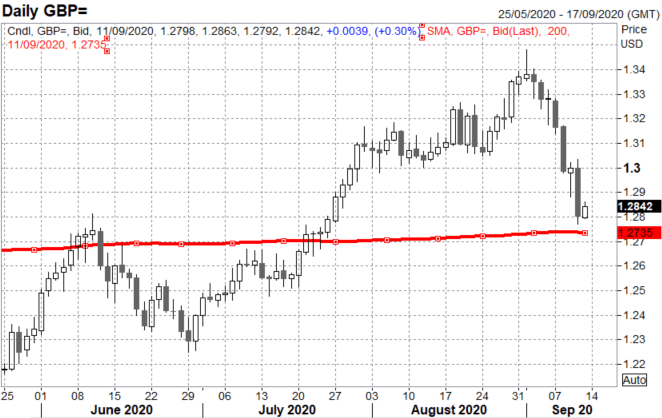 The move lower in the Pound had been further compounded by the surge in EUR/GBP which posted its 2nd best day this year rising over 1.6%. The cross benefitting from the best of both world’s of Brexit uncertainty and the ECB’s surprising calmness over the appreciation in the Euro, subsequently giving the all-clear for Euro bulls. That said however, with EUR/GBP rising to its highest level since the COVID crash, rising to 0.9270, the typical nature of the cross since Brexit has been one of which where EUR/GBP has failed to sustain a move above 0.9300, despite some analysts emerging with parity calls again. 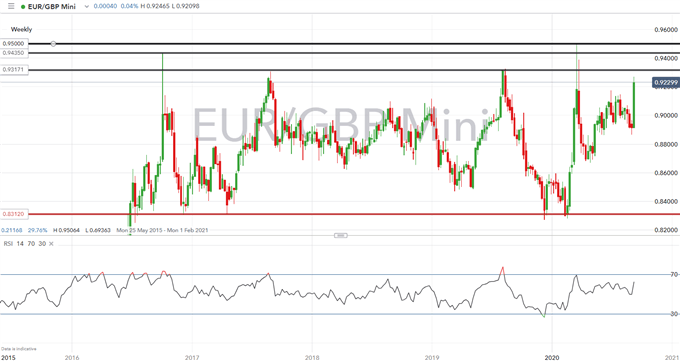