Although the emerging market is still experiencing the first wave of the Coronavirus pandemic, the easing of lockdown measures boosted hopes of a economic recovery but optimism was short lived after power utility, Eskom, reimplemented load shedding (rolling blackouts), hindering business productivity.

Over the next six weeks, focus will be on the mid-term budget speech, where South Africa’s Minister of Finance, Tito Mboweni will discuss the road ahead, which is definitely not going to be an easy one. This is expected to take place between 19-26 October, although no official has been confirmed. With Tax revenues decreasing and government debt increasing at a rapid rate, risk sentiment will likely be influenced by the policy plans discussed.

In August, the ZAR managed to strengthen against its USD counterpart, mainly attributed to Dollar weakness, but bears were unable to break through the 50% Fibonacci retracement level (16.635) which continues to hold as support. 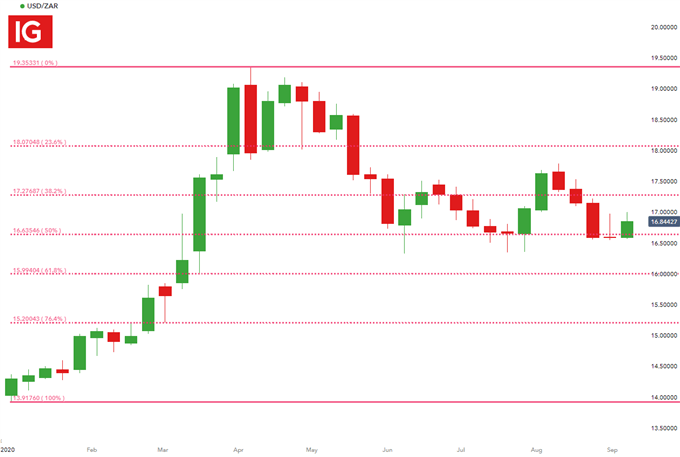 Although the ZAR has fallen against the US Dollar, bulls were still unable to break above 17.00, a key psychological level. Meanwhile, the 50-day Moving Average has formed an additional resistance level, creating downward pressure on the pair. 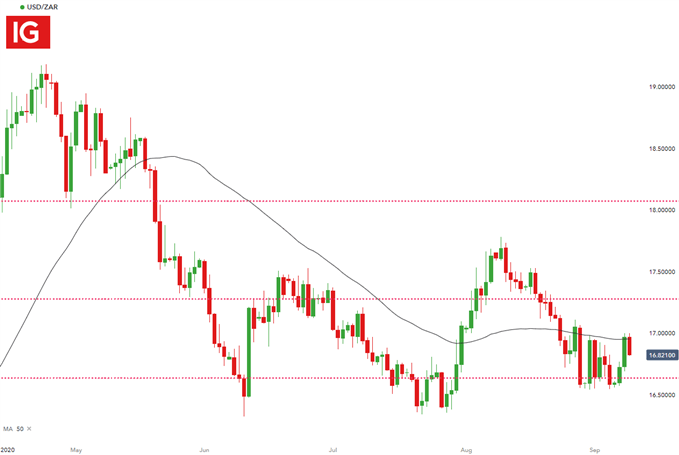 While economic uncertainty, corruption and mismanagement of funds have raised concerns about the recovery of the Rand, the upcoming US elections and rising tension between America and China, are additional factors to consider moving forward. As elections approach, volatility between the pair is expected rise, which may see price action gaining momentum in either direction.

However, if South Africa is able to provide a solid plan to boost economic recovery, bears may be able to exert downward pressure, in an effort to break below 16.635, the 50% Fibonacci level which holds as support.