The Japanese Yen (JPY) has given back roughly 1% of its gains to the US Dollar this week. With the resignation of Prime Minister (PM) Abe last week, the Yen received a boost from political uncertainty about the PM Abe’s successor along with potential policy amendments. With PM Abe’s right hand man Suga Yoshihide now the front running candidate with an estimated 70% of votes within the Liberal Democratic Party (LDP).

Economists and political analysts seem to be in favor of the likely replacement as his wealth of experience and familiarity with current policies should equip him with the necessary skills for the role. 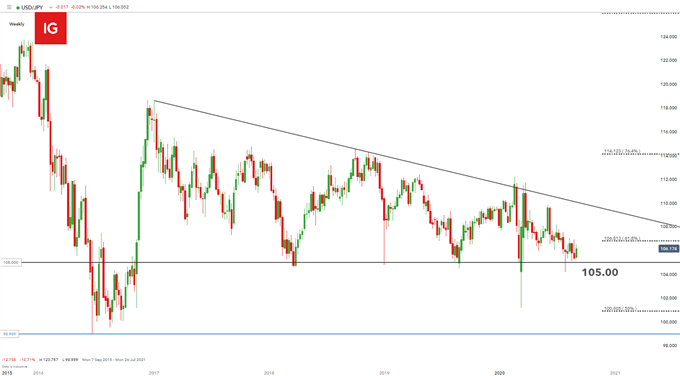 Since my last update highlighting PM Abe’s resignation, price has bounced of the multi-year support zone around the 105.00 psychological level. The descending triangle formation still holds shape as price action is yet to provide a confirmed breakout. The 105.00 support zone remains key for bears but with more surety within the Japanese political environment the Yen has since retreated. Fundamental drivers will provide further price stimuli and with multiple economic events on the horizon, which may give the pair a purposeful directional catalyst. 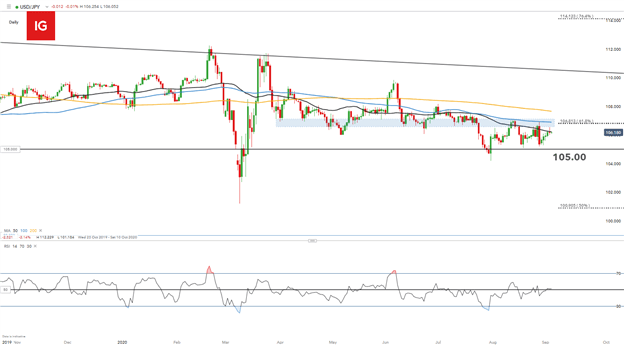 The near-term uptrend may continue with initial upside resistance around the 107.00 zone (blue). The 106.81 61.8% Fibonacci (Fibonacci taken from September 2011 low to June 2015 high) and 100-day Moving Average (MA) coincides with this resistance zone which will prove a key horizontal level if price push above. The Relative Strength Index (RSI) shows a mixed signal as it hovers around the 50 level (black) which is neither indicative of bullish or bearish momentum. Any extended move above may suggest further upside on the price chart.

Beginning with today’s Non-Farm Payroll (NFP) data – 12:30GMT which is estimated at 1400K (refers to the number of jobs expected to be added in August). Unemployment is also expected to decrease to 9.8% from 10.2%. Any significant deviation from these figures may induce large variations in price so it is important to monitor the data releases.

Next week includes Japanese GDP and US inflationary figures which could promote additional interest around the USD/JPY pair.

IGCS shows retail traders are marginally net long on USD/JPY, with 53% of traders currently holding long positions (as of this writing). At DailyFX we typically take a contrarian view to crowd sentiment, and the fact traders are net-long is suggestive of a bearish bias on the pair however due to a reduction of net change in long positions relative to short positions, this is suggestive of a bullish signal.