The US economy received a boost as it expanded by 1.371 million jobs and recorded an unemployment rate of 8.4%, beating expectations of 9.8%. For the real time report, refer to US Dollar Swings on NFP Report Beat, Unemployment Below 9%

The EUR/USD currency pair has continued trading lower, boosted by the dollar positive jobs data. It now trades toward channel support as well as horizontal support. Yesterday’s extended candle wick indicated a rejection of lower prices however, added momentum off the back of the better than expected NFP may result in a retest of this area of confluence.

In further support of a continued move lower, is the appearance of negative divergence on the RSI, as price made higher highs while the indicator made lower highs. The initial litmus test remains the zone around 1.1790 which then brings into focus the 1.1760 level, however, the psych level of 1.1700 remains key to entertaining the idea of a reversal. 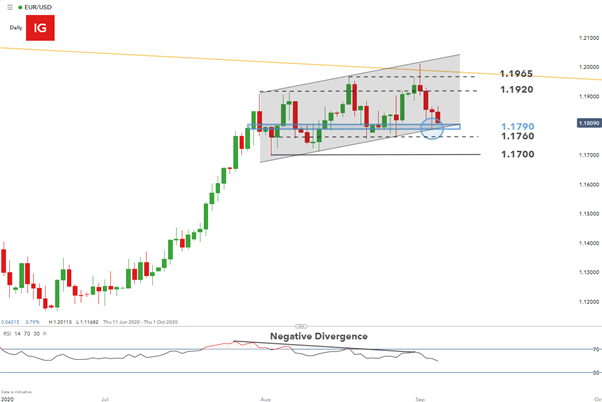 Should Bulls push price higher from here, the 1.1920 level becomes the nearest level of resistance before the 1.1965 level and upper side of the long term symmetrical triangle (yellow line) come into focus. 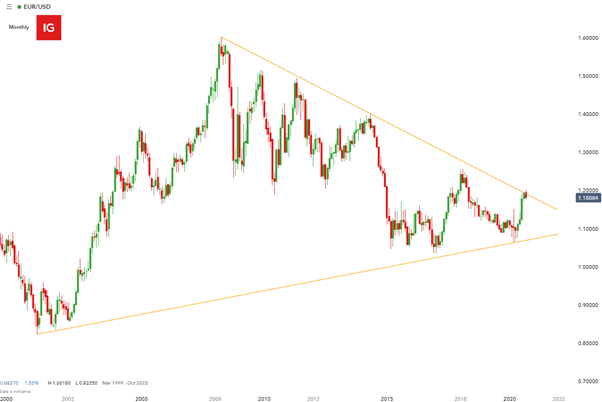 Learn how to identify and apply the three main triangle patterns

Risk Events Ahead: Volatility expected to continue into next week

The Eurozone is set to start the week off with its 3rd estimate for the Q2 GDP growth rate on Tuesday, followed by the ECB interest rate decision and press conference a little later on in the week.

Friday sees the US release the core inflation rate for August – this comes after J. Powell’s address at the Jackson Hole Symposium where he announced that the Federal Reserve are to adopt a looser monetary policy framework in the form of Average Inflation Targeting 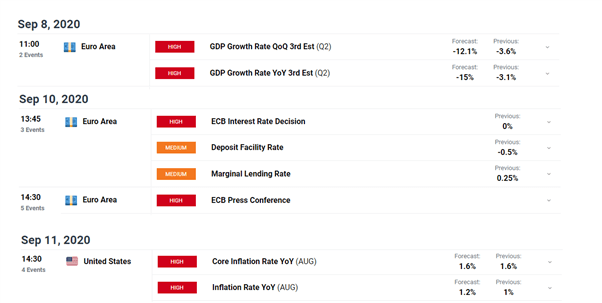