Gold rounded out the month of August on a quiet note, maintaining a relatively tight trading range compared to some of its volatility in months past after a troublesome start in early August. Nevertheless, the precious metal was able to recoup some of its earlier losses and enjoys a technical position that may be constructive for further gains. Further still, the fundamental tailwinds that have helped gold climb remain in play. 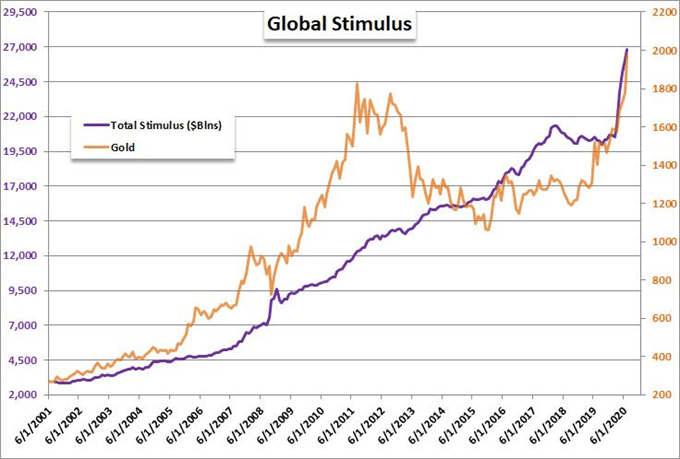 To that end, stimulus from the world’s leading central banks continues to grow as they look to revive their respective economies in the wake of covid-19. With a period of low interest rates and expanding balance sheets ahead, fiat currencies may continue to shed value relative to other stores of value like gold and silver.

Thus, the longer-term outlook for gold remains encouraging in my opinion and periods of weakness may allow for attractive trading opportunities as they might act as mere consolidation before a continuation higher. With that in mind, traders should track nearby support as the levels could offer enticing risk-reward opportunities.

As it stands, nearby support may reside along the ascending trendline from May – around $1,932 – while a subsequent Fibonacci level at $1,920 could offer secondary support. Together, the areas of potential support might help keep gold prices afloat in the event of a bearish reversal. In addition to the previously outlined levels, technical influence may also be derived from the August swing low around $1,863.

A bearish breach of the $1,863 level might warrant a reconsideration of the broader technical backdrop, as it would establish a lower-low and could mark the beginning of a larger bearish trend. Without such a development, both the technical and the fundamental backdrops look encouraging for further gold strength in the weeks to come. In the meantime, follow @PeterHanksFX on Twitter for updates and analysis.