The New Zealand Dollar capitulated after the Reserve Bank of New Zealand announced the expansion of “the Large-Scale Asset Purchase (LSAP) programme up to $100 billion” and flagged the potential deployment of “additional monetary instruments”. Inclusive of foreign asset purchases and a negative OCR.

Although the RBNZ kept the official cash rate steady at 0.25%, it seems as though this could be but temporary in nature as committee members “agreed any move to negative rates could be effective”.

This willingness to “provide additional stimulus as necessary” could see the RBNZ continue to dive into its monetary policy toolbox, as the “return to social restrictions in New Zealand” proves that the “domestic economic outlook remains dependent on the containment of the virus”.

Therefore, it appears that the New Zealand Dollar could come under increasing pressure should local health developments force the hand of the RBNZ.

Even though recent economic data suggests the local economy is performing better than expected. 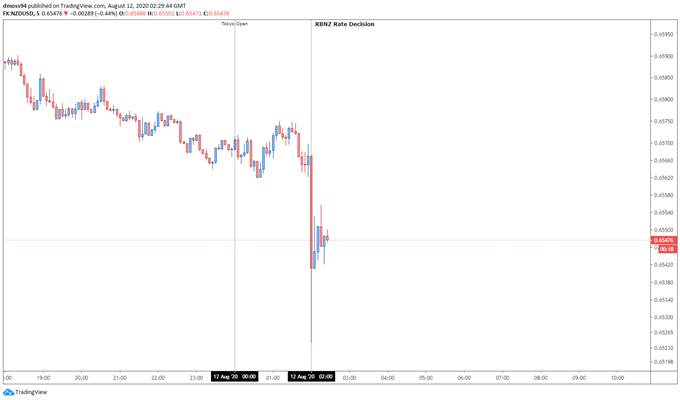 Covid-19 developments aside, recent economic data has suggested that the New Zealand economy is performing much better than expected as the unemployment rate declined to 4% in the second quarter, smashing the consensus estimate of a 5.8% jobless rate.

With the jobless rate back at pre-crisis levels and employment only falling 0.4% in the three months through June – significantly less than the expected 2% decline – the economic outlook for the island-nation appears to be trending in the right direction.

Having said that, much will depend on local Covid-19 developments as a cluster of cases in New Zealand’s largest city threatens to halt the nascent economic recovery.

What’s troubling about the recent cluster is that the original source has yet to be identified, which means that “there are almost certainly other active cases of Covid-19 present in Auckland at the moment [and] there is also a chance the disease will have spread to other parts of the country” according to University of Auckland Professor Shaun Hendy.

Although the four cases had come from one household, Arden requested that “people in Auckland stay home to stop the spread’ and moved to impose ‘stage-three’ restrictions in New Zealand’s largest city for the next three days. The rest of the nation is shifting to ‘stage-two’ measures, which “means social distancing applies and mass gathering will need to be limited to 100 people”.

Given the limited nature of the restrictions, the overall effect on the economy and in turn the New Zealand Dollar may remain relatively minimal.

However, a ramp-up in testing may lead to increasing case numbers and would probably result in the tightening of restrictive measures.

Therefore, investors should continue to monitor local health developments as the threat of a ‘second wave’ of Covid-19 infections may hamper NZD against its major counterparts and result in the RBNZ resorting to alternative monetary policy tools.