USD/CAD has mirrored much of what has been evident across G10 currencies against the US Dollar. The weak USD has breached several key support levels which has brought into question its viability as a safe-haven currency. This may be more noise than information based on actual data, at least at this early stage of the bearish USD trend. Although US stimulus undertakings and poor economic data have spurred much of its recent decline, the US Dollar is still the global reserve currency. The Euro may be the ‘talk of the town,’ but fundamentally, the Eurozone has a long way to go before it will be considered as an alternative. 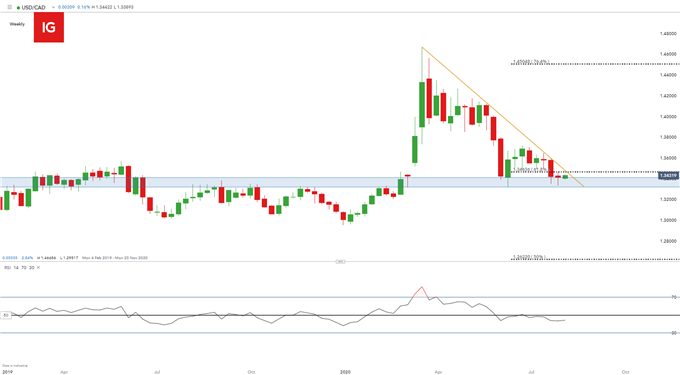 The weekly chart above represents the sharp decline in USD against CAD as expressed by topside resistance (yellow) of lower highs and lower lows. The current support zone (blue) has shown to be a key zone with price respecting the area whether it reflects support or resistance. Bulls have defended the lower bound of the support zone with conviction so far, but will a succeeding test bring the same result? The bearish bias is hard to ignore but global economic factors may bring about a shift in momentum.

The Relative Strength Index (RSI) is below the 50 level which alludes to the current bearish outlook, but downside momentum has slowed as substantiated by the flattening of the RSI chart line. 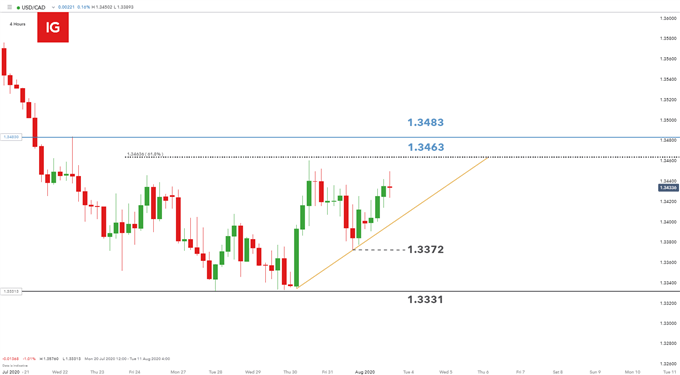 The end of July has presented US Dollar strength off the 1.3331 support level. Price action continues to display a short-term uptrend highlighted by the diagonal trendline support (yellow). The 61.8% Fibonacci level (1.3463) will be a key level for bulls as they look to it for initial resistance – Fibonacci taken from January 2002 high to November 2007 low. A breakout above this level may extend to the prior July swing high 1.3483; and beyond that, the 1.3500 psychological level looms large.

With sentiment data (see below) pointing to further downside potential, bears will monitor trendline support (yellow) as an area of confluence, where a breach below may see the recent swing low 1.3372 come into play as primary support. 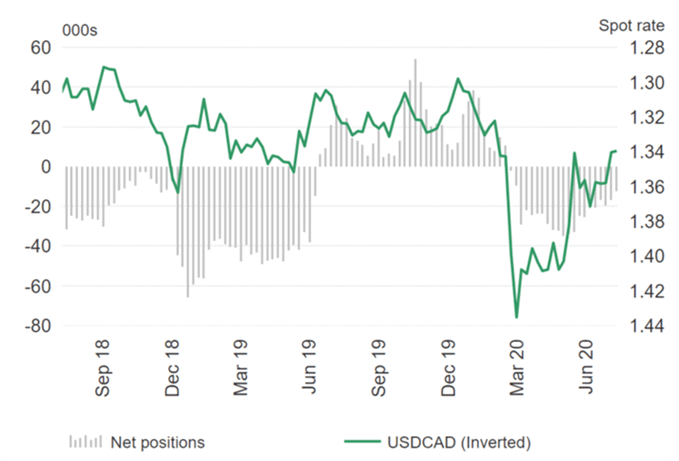 The COT report above shows overall net increase in short positions for USD/CAD which is indicative of a continuation of recent CAD strength against the USD. This report is slightly lagged which opens up the possibility of opposing changes in net positions.

DECLINES IN OIL REFLECTIVE IN LOONIE

OPEC+ has been in at loggerheads with the vast majority of its members looking at cutting supply, but Russia adamant on increasing its own production by 400000bpd. Lesser demand for the commodity as a result of reduced demand in manufacturing has stifled the short-term price appreciation. Further price declines may negatively affect the Canadian Dollar which has benefitted from the recent rise in oil prices coupled with the weak US Dollar. Traders should keep an eye on supply and demand factors affecting oil which can display a strong correlation with CAD.

The economic calendar is studded with high impact events relevant to USD/CAD. These data releases may give traders hints to the longer-term direction of the pair. The US Dollar may be given more attention being the world benchmark currency, but Canadian data should not be overlooked. These figures will give traders insights into the state of parts of the overall economy which has significant parallels with currency markets.

With the US Dollar in unchartered territory, will the reserve currency be able to restore its dominance? Market conditions do not appear favorable to the Canadian Dollar either, with oil consolidating and COVID-19 restricting manufacturing progress. How will Q3 unfold for USD/CAD? Some key points to consider:

In validation of the COT report (above) IGCS shows retail traders are currently prominently long on USD/CAD, with 71% of traders currently holding long positions (as of this writing). At DailyFX we typically take a contrarian view to crowd sentiment, and the fact traders are net-long is suggestive of a sustained bearish bias.