A wave of risk aversion halted the recent rally in cycle-sensitive assets last week, as concerns of a possible second wave of the novel coronavirus spooked market participants, with global cases surpassing 9 million and deaths approaching 500,000.

These concerns seem to have been dismissed, as the haven-associated US Dollar continues its slide against its major counterparts and global equity indices resume their respective climbs higher, with S&P 500 futures pushing back above the 3,100-handle after dipping as low as 2,936 on June 15.

Investors may be discounting the overall impact of the disease, as although daily new cases continue to climb the death rate has tapered substantially since the peaks of late-March, early-April, suggesting the virus may have mutated into a more infectious, less-deadly strain. 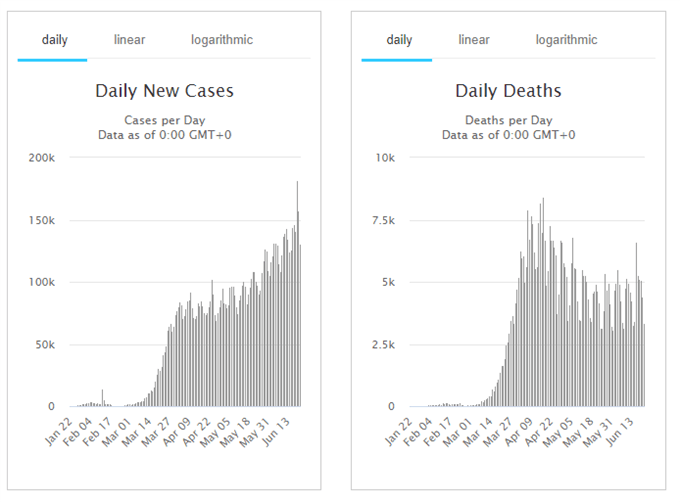 A possible injection of $1 trillion in infrastructure spending touted by the Trump administration, combined with the recent weakness of the US Dollar, has seen the price of copper surge as much as 37% from the yearly low (1.9671).

As economies around the world attempt to return to normalcy post-crisis, a resumption of manufacturing and construction activities could continue to support the price of the global-growth proxy.

Climbing back above the 2009 trend that prices penetrated in early-March saw the RSI surge into overbought territory for the first time since February 2019, driving price to test key resistance at the convergence of channel resistance and the 78.6% Fibonacci (2.679).

With price remaining confined within an Ascending Channel there is potential for copper to grind higher, as both the RSI and momentum indicators continue to respect their constructive trends from the yearly lows. 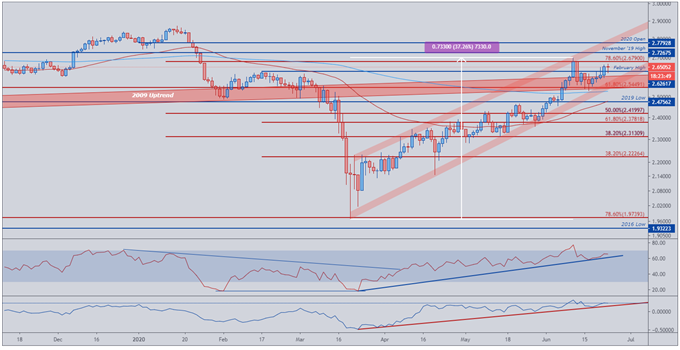 Silver has also benefitted substantially from the recent weakness in the US Dollar, as it surged above the yearly open (17.83) on the first day of trade for the month.

With the RSI surging into overbought territory not once, but twice, prices looked certain to break above the February high (18.94) and 2013 downtrend.

However, this has failed to eventuate as the return of risk aversion dulled the eagerness of buyers sending price back towards support at the uptrend from the March low (11.64).

Despite breaking its 14-week uptrend, silver remains constructive above key psychological support at the 17-handle as the RSI and momentum indicator continue to signal bullish intent.

Consolidating in a short-term Symmetrical Triangle highlights the potential for a price breakout should either support or resistance give way.

Price successfully clearing resistance at the 2020 open (17.83), in tandem with both technical indicators continuing to strengthen, could signal a resumption of the impulsive move from the March lows, with key hurdles falling at the June (18.38) and February highs (18.94) 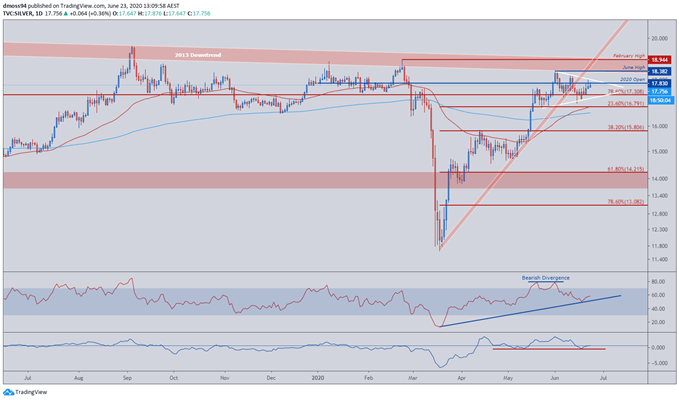