Federal Reserve Chairman Powell testified before the Senate Banking Committee Tuesday morning, where members of the Senate were briefed and allowed to question Chair Powell on the current state of the economy and Fed policies. Equity market strength remains following the testimony to congress, but fell from its intraday highs as news out of Beijing crossed the wires revealing that Beijing raised its emergency level as COVID-19 cases appear to be increasing. This follows equity markets receiving a boost Tuesday morning from better than expected retail sales figures for the United States. 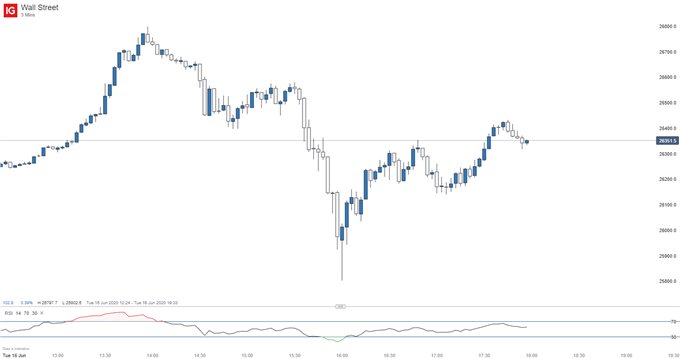 In his testimony, Chair Powell reiterated recent sentiment that the Fed is committed to using all its tools to bolster economic activity in response to the COVID-19 pandemic. More unconventional proposals being called for recently, such as negative rates, were once again shot down as Chair Powell said negative interest rates are “not attractive” for the United States. However, yield curve control (where the Fed would purchase targeted maturity bonds to keep a ceiling on rates) is being looked at by the Federal Reserve, although Powell stated that it is in the early stages and no decision to it being used in the future has been made yet.

Chair Powell also called attention to the path of the federal budget being on an unsustainable path. Still, it was suggested that more fiscal stimulus may be needed and noted that the path to recovery will be a long road that is highly dependent on the path of the virus in the United States. Turning to Fed facilities, particularly the bond market, Chair Powell said he doesn’t want the Fed going through the bond market “like an elephant,” but also stated that it is still necessary to be ready to step in if things get bad.