The growth-linked Australian Dollar cautiously rose on Friday as it benefited from an uptick in market sentiment into Wall Street close. Gains in the Aussie were somewhat restrained due to a somewhat pessimistic tone during the European trading session. While the DAX 30 and FTSE 100 closed -1.69% and -1.28%, the Dow Jones and S&P 500 finished +1.11% and +1.39% respectively.

A couple of factors may have been behind gains in US equities. President Donald Trump signed off on a $484 billion interim stimulus package to help combat the economic fallout of Covid-19. This is as his European counterparts - while agreeing on a $580 billion short term package - failed to find an accord on a longer-term solution. Meanwhile University of Michigan sentiment surprised at 71.8 in April versus 68.0 expected.

Overall Friday was a rather quiet session for foreign exchange markets. The haven-linked US Dollar did lose a little bit of ground. My majors-based USD index even took out a near term rising support line, hinting at what could be a sign of weakness ahead. The Canadian Dollar also struggled even though crude oil prices largely traded sideways and appeared to stabilize after briefly turning negative earlier in the week.

With that in mind, Asia Pacific equities may follow Wall Street higher as the session gets going. Weekend futures tracking North American equities are fairly mute. This is despite virus fatalities from European nations touching their lowest in weeks. Italy’s Prime Minister Giuseppe Conte announced that the nation will start easing lockdowns beginning on May 4. That could perhaps offer a near term boost to the Euro ahead.

Should equity indexes such as the Nikkei 225 or ASX 200 push higher, the anti-risk Japanese Yen could see some selling pressure. The Bank of Japan rate decision is due later today at an unspecified time. Japan’s central bank is expected to leave the policy balance rate and 10-year yield target unchanged. But it could introduce or expand on existing programs to help stem the economic fallout of the virus.

AUD/USD may continue pressuring key resistance which is a range between 0.6385 to 0.6407. The Aussie has been consolidating as of late with the lower boundary of support at 0.6250. Further upside progress would mean also testing falling resistance from December – red lines on the 4-hour chart below. That would expose the current April high at 0.6445. 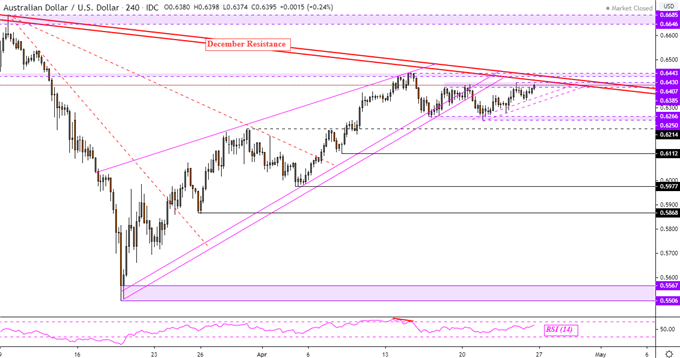