The Australian Dollar was steady on Tuesday following the release of minutes from the last Reserve Bank of Australia monetary policy meeting, on April 7.

The central bank left its key Official Cash Rate at 0.25% after it. declining the quarter-point reduction that markets narrowly expected. The OCR fell twice in March, however, to its current record low of 0.25%, with an extra cut added as part of measures to mitigate the economic effects of the coronavirus.

The minutes left the perhaps predictable impression that. considerable monetary and fiscal stimulus having been applied, the central bank was now content to wait and see what more was needed.

In the minutes, the RBA said ‘various responses;’ already made were ‘providing considerable support’ to households and businesses. However, it cautioned that support packages couldn’t provide a near-term boost to spending while the economy was subject to lockdowns.

The central bank recommitted itself to a three-year bond yield target of 0.25%, but said that smaller, less frequent purchases of government bonds may be required going forward.

The Australian Dollar was under some pressure as the Asia Pacific session got under way Tuesday. Collapsing oil prices had put renewed focus on haven assets rather than growth-correlated units like the Aussie. However, AUD/USD stabilized early in the session and didn’t move far on the minutes. 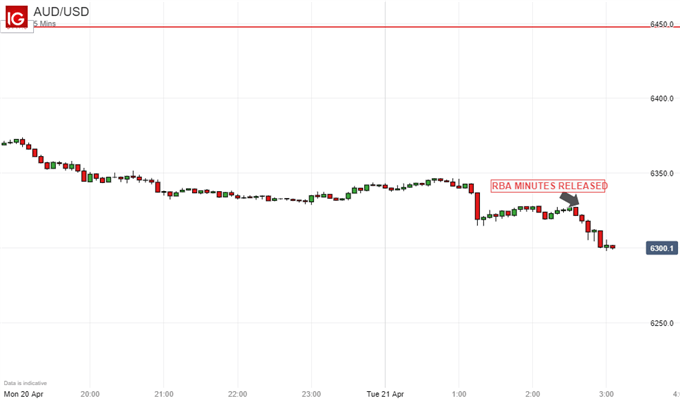 The Australian Dollar has bounced back impressively from its March lows, buoyed up like many other growth-correlated assets by the massive fiscal and monetary rescue packages put in place by various governments, most notably of course the US. 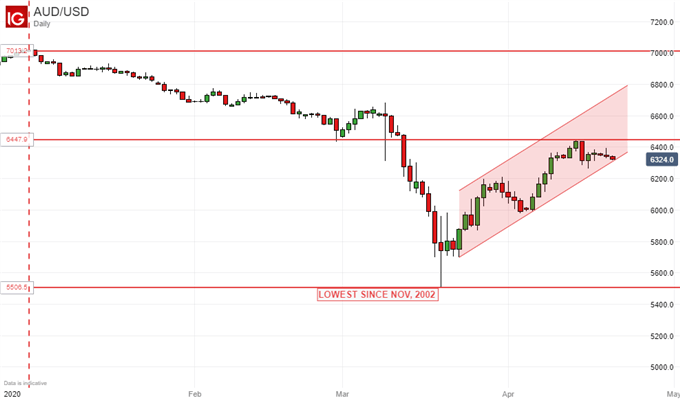 However, while these measures may have reduced the chance of a damaging ‘credit event,’ stimulus measures can’t fully operate until economic agents are free to engage with the economy again. As they clearly can’t do this under lockdown conditions, it seems likely that risk assets such as the Australian Dollar will face a rethink.

It’s notable that this year’s downtrend remains in place.

Attention now switches to the next policy decision which is not due until May 5. Current futures market pricing has markets expecting a reduction by a margin of 57%.