The Australian Dollar rose Wednesday following the release of official Consumer Price Index data which showed overall prices rising at their strongest pace for a year.

The 1.8% increase was still below the Reserve Bank of Australia’s longer-term 2-3% target. The rate has not been in that band since 2017. But the uptick from the third quarter’s 1.7% marks a fourth straight quarter of acceleration and is likely to be welcomed by the central bank.

However the ‘trimmed mean’ measure which attempts to strip out volatile price components in the same way that ‘core inflation’ measures do elsewhere in the world remained stuck at the 1.6% rate it has now hovered at for five quarters. Pricing power is clearly still extremely restrained. This may account for the currency's quite limited response to the headline figure.

Still, the RBA will give its first monetary policy decision of this year on February 4. Market pricing swung around to quite emphatically price out any chance of a reduction in the record-low, 0.75% Official Cash Rate in the wake of last week’s strong rise in headline job creation, even though part-time roles accounted for all of the increase seen.

These inflation data are unlikely to change the prognosis that rates will be staying put, with the RBA’s ‘gentle turnaround’ thesis on the economy still highly defensible. Obviously, the central bank wants to see inflation a little higher and employment a little lower, but both metrics seem to be heading in that direction.

AUD/USD rose as the ‘no change’ prognosis has clearly survived this last major domestic data cue before the central bank meets. 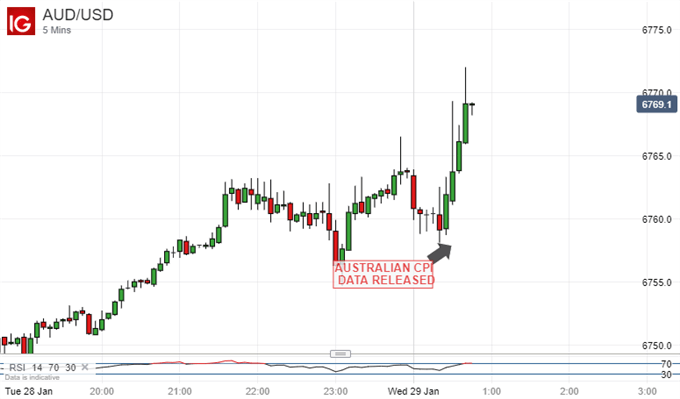 On its daily chart the Australian Dollar is back to lows not seen since late 2019 against its US big brother. The growth-correlated Australian Dollar has been hard hit by fears around the spread of Wuhan-strain coronavirus out of China. The currency is exposed to broad ‘risk off’ sentiment which invariably accompanies this news but also, more specifically to worries about the effects of the virus on both Chinese growth and travel in the Asia Pacific region. 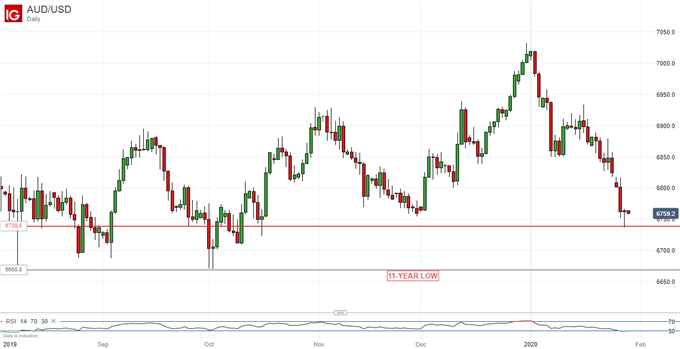 The Aussie got a big lift into 2020 as market hopes for a US-China trade deal and a relatively soft exit for the United Kingdom from the European Union buoyed all such risk on assets.

However the picture has clearly altered markedly before 2020’s first month is out of the way. Coronavirus aside a substantive trade settlement between the world’s economic superpowers will clearly take a long time, if it’s achievable at all, and the post Brexit trade settlement between the UK and the European Union is likely to see some torturous negotiations. In short the international environment remains highly uncertain, with global growth hardly stellar and central bankers low on stimulus ammunition.

This is not a backdrop conducive to gains for the Australian currency even if domestic interest rates head no lower next month.